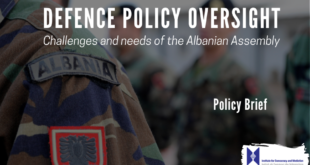 January, 2021 – The military is a key instrument of national power. Their critical importance for defence and the potentially devastating effects from their misuse or lack of readiness require that defence policy is formulated through careful and professional analysis of national threats and strategic objectives. This is essential to ensure the military readiness, professionalism, and effectiveness of the armed forces. The Albanian Assembly has a central role to achieve these objectives by exercising effective oversight on defence policy, but has been unable to fulfil this core mission.

Despite Albania’s NATO membership, the country’s standards of parliamentary oversight are insufficient to ensure that defence policy is examined by the legislature and its implementation is thoroughly scrutinised. This policy brief outlines the main shortcomings of these processes by focusing on the deliberations of the Committee for National Security on government defence bills, the use of parliamentary tools to hold defence officials accountable, and the Assembly’s research and expertise capacities. To successfully exercise oversight of defence policy, the Assembly must require the government to include impact assessments of proposed bills, task the parliamentary research service (PRS) to provide evaluations on defence policy implementation, and build its research and expertise capacities.

Presentation of the CSOSI 2020 Report Albania