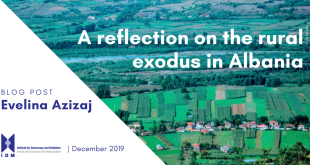 A reflection on the rural exodus in Albania | December 2019

A reflection on the rural exodus in Albania

Agriculture and rural development are important both for the economy and demographics of Albania. Nevertheless, in the last twenty years the demographic impact of rural areas has declined as the economic weight has increased. The percentage of gross value added generated from the agricultural sectors of, forestry, hunting and fishery amounts to 22%; however, 38% of all employment comes from the agricultural sector. Both indicators stand higher compared to South-East European (SEE) countries and significantly higher than the average of EU countries, reaffirming the relevance of the sector to the national economy. In recent years there has been an intensive depopulation of rural areas due to the high levels of emigration. Currently, the rural population in Albania represents 39.7% of the population, compared to 59% two decades ago (1998).

Albania’s rural areas have, over the last decades, gone through severe problems, including substantial depopulation, inadequate public services, low access to public services and markets, deficient public infrastructure, etc. Research shows that socio-economic indicators of rural areas lag behind those of urban and peri-urban areas; poverty is highest in rural areas and rural populations are living largely under sub-standards conditions, as compared to the urban areas. Other structural and resource limitations and challenges hindering rural development include predominantly the following: limited size of agricultural holdings, lack of property land titles, poor marketing of products, underdeveloped agriculture infrastructure, low use of technology, low access to public services, weak organisation and cooperation among farmers and among different stakeholders, weak social capital, etc. Community prosperity is impeded by lack of employment opportunities. While positive models exist in rural development, due to abundant natural resources, rich cultural heritage and potential of the sector, migration from rural to urban areas remains a concerning reality. Emigration is an unavoidable way out – not a choice for the population. Many rural areas are involved in an irreversible process that is reducing them to purely geographic denominations.

Yet national agrarian and rural policies fail to effectively address challenges confronting rural areas. Irrespective of demographic and economic relevance, the sector has very low budgetary support to make agriculture an attractive sector. Farmers, in particular small farmers, continue to face economic hardships, and their prospects for development appear to be diminishing. The national budget for the sector in 2019, which was drastically reduced, signaled the devaluation of the agrarian sector and will most likely undermine farmers’ trust in agrarian policies by forcing them to invest in alternative sectors. Consequently, Albanian farmers, pressured by poor economic conditions, will be more likely to leave the village to secure a better future.

In a regional study the percentage of young people that reportedly intend to leave their home was the highest in Albania (66.7%) compared to other Western Balkan countries (Flere, Sergej, et al., 2015).  The motives mentioned by these young people were “improving their standard of living, better employment possibilities or better educational prospects” (Flere, Sergej, et al., 2015). This holds true also for rural youth, whose migration, especially from mountainous and remote areas, is highly evident. The Albanian farmers need effective and continuous financial support to maintain and strengthen their economic activities and sustain community life.

The Albanian Network for Rural Development (ANRD) is a genuine initiative of civil society that strives to contribute to sustainable development of rural communities by taking up an active role in the reformation process of the sector. ANRD is trying to build an active and inclusive national rural agenda including gender equality, LEADER/CLLD, family farming, agro-tourism, sustainable agriculture, youth and VET education etc. ANRD has been able to generate enthusiasm, interest and support from grass-roots to sustain such national-wide rural agenda to express the interests of rural communities, to connect with government and to influence the policies and actions of governments and other rural stakeholders.

Presentation of the platform on “Development Indicators”

An Assessment of Community Policing in Albania 2007-2015