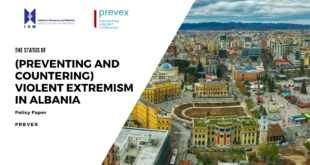 The status of (preventing and countering) violent extremism in Albania

January 2021 – More than five years have passed since 1353 men, women, and children travelled from the Western Balkans to Syria and Iraq. Since then, western Balkan governments have taken substantial measures to prosecute those that travelled to join a foreign (para)military group and to discourage others from doing so. In 2014 and 2015, the governments in the region amended their penal codes, making it illegal to join military operations in a foreign state, or support a military operation in a foreign state through other means (e.g. calling for others to join, helping others to join, or by offering financial support).

Most countries followed swiftly with the drafting and subsequent adopting of a National Strategy on Countering Violent Extremism, outlining a series of measures and actions to be taken by a wide range of government and public sector stakeholders working in education, law enforcement, and social welfare. Civil society organisations – with the support of the international community and other foreign donors – stepped in to increase the understanding of the phenomenon and implement projects that would prevent radicalisation and violent extremism in the future. Besides the US State Department and UNDP, the European Union (EU) and its Member states are significant donors to projects that aim to counter and prevent violent extremism in the Western Balkans. The proximity of the region, the high number of foreign fighters per capita, as well as the recent history of instability, caused concern with the EU and its Member States. Moreover, foreign fighters from the EU and its direct neighbourhood were linked to several large-scale terrorist attacks, including the attacks in Paris in 2015; in Brussels, Berlin and Nice in 2016; and in Manchester, London and Barcelona in 2017.

Since 2001, the EU has developed and refined its counter-terrorism approaches and policies a number of times. Yet, with new challenges such as the returning foreign fighter phenomenon arising, while structural and socio-economic issues are not resolved, it is imperative that more fine-tuned and effective approaches to preventing violent extremism are put forward – both inside the EU and in its neighbourhood. Therefore, the project ‘Preventing Violent Extremism in the Balkans and the MENA: Strengthening Resilience in Enabling Environments’ (PREVEX) carries out context-sensitive, in-depth case studies of the occurrence and non-occurrence of violent extremism. These in-depth case studies, which will be brought together in regional comparisons, help improve the understanding of how different drivers of violent extremism operate and how resilience can be strengthened in ‘enabling environments’. These findings contribute to more effective policies that prevent violent extremism through strengthening societal resilience.

PREVEX employs a bottom-up approach to local-global dynamics, meaning that this paper is the first of several country-specific policy documents that feed into the analysis of Albanian-speaking countries and subsequent regional analysis of the Balkans. This policy paper focuses on the aptness of the EU and other stakeholders’ prevention strategies towards violent extremism in Albania. Main recommendations are:

This project has received funding from the European Union’s Horizon 2020 research and innovation programme under grant agreement no 870724. Unless otherwise indicated, the views expressed are attributable only to the authors in a personal capacity and not to any institution with which they are associated, nor do they necessarily reflect the views or policy of the European Commission. For more information on the PREVEX project, see: http://www.prevex.balkan-mena.eu.