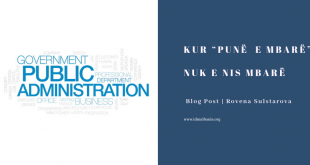 Not a good start for “good luck” platform

The students’ protests of last December brought significant attention to some of the pressing issues with Albania’s education system, effectively putting concerns over the quality of higher education and employment prospects of recent graduates on the political agenda. The students demanded for a substantial increase of the state budget for public universities, a new law on higher education and improvement of the quality of education and general infrastructure, etc. The Albanian government addressed the requests made by the protesting students through its “Pact for the University”, a platform that comprehensively set milestones for fulfilling the requests. Part of the Pact are a number of legal measures adopted by the Council of Ministers. Below are mentioned some critical aspects of a bylaw, part of this Pact, which aimed to address the concern of employment opportunities for the university graduates.

Council of Ministers Decision no. 766/2018 “For the employment of students of academic excellence in institutions of public administration, part of the civil service, for 2019” was one of the measures to address the issue of employment prospects for university graduates. Through an online registration platform called “Good Luck (“Punë të Mbarë” in Albanian)” excellent graduates can be hired in the public sector without going through the recruitment and selection process. The only requirement is to have completed either a Bachelor’s or a Master’s degree with a grade point average (GPA) of 9-10. The media euphoria that followed the initial implementation of this process hid the fact that it was in contradiction with the law which regulates the status of the civil servant and their recruitment in the public administration.

The law, Law no. 152/2013 “On the civil servant” was drafted in accordance with the European Commission recommendations and approved by bipartisan consensus. It strictly defines the principles, criteria, and procedures for the regulation of the Albanian civil service. Therefore, the government’s decision, which led to the online registration platform, is unconstitutional and contradicts the Civil Servant Law because of the following arguments:

Consequently, despite its will to address the issue of unemployment of recent graduates through Decision no. 766/2018, the government follows a trend of offering temporary solutions. As it usually happens, the public administration is being used as an easy employment opportunity, instead of enacting proactive policies which would provide the necessary conditions for the economy to grow, thus expanding those opportunities. Decisions like this, which contradict established laws, tend to deepen the problems rather than provide well-thought and sustainable solutions to improve both the employment of university graduates and the quality of public administration.

Use of Indicators to Improve Accountability and Promote Regional Competition