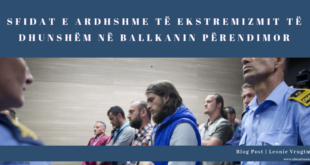 Future challenges of violent extremism in the Western Balkans

*This article was originally published by the academic blog ResPublica  on 15 February 2019.

Western Balkan countries face a new security challenge: the deradicalization and reintegration of returnees. By 2017, at least 310 adults had returned to the region and it was estimated that another 460 – mostly women and children – remained in the Middle East or have gone under the radar upon returning. Without a credible reintegration platform to ensure their disengagement to the groups they fought for, these individuals could pose a threat as future fighters or recruiters.

Over the past few years, religious violent extremism has been the dominant concept for security experts in south-eastern Europe. Hundreds of articles, reports and books have been written about the threat of home-grown terrorism and the increasing number of radicalized people in the region. Understandable, considering the striking number of people leaving small countries like Bosnia, Kosovo and Macedonia for Iraq and Syria. The region hosts four countries out of the top-12 countries of foreign fighters per capita and has seen a significant number of terrorist plots.

In 2016, a group of 19 Islamic State supporters planning attacks in Albania, Kosovo, France and Belgium was folded. The infamous group targeted among others a World Cup qualifying match between Albania and Israel. Inspired by the 2015 Paris Attacks, the terrorists planned to start the assault by attacking the Israeli team with a drone and then enter the stadium with Kalashnikovs. Hundreds, maybe even thousands of people could have been killed. Following the trial, the prosecutor noted that the timely arrests averted the danger and thwarted a planned attack on a Serbian Orthodox church in the northern city of Mitrovica, in Kosovo.

Countering violent extremism in the region

The arrest of this group demonstrates that Western Balkan countries have stepped up and taken measures to prosecute active supporters of terrorist organisations. In most countries, amendments to the Penal Code were made and CVE action plans were drafted and implemented. All six countries even signed a joint counter-terrorism action plan as a sign of their commitment. However, it remains a challenge for prosecutors to convict foreign fighters due to a lack of evidence and weak judicial systems. Still, the efforts of the governments have haltered the exodus of foreign fighters to Syria while counter-extremism strategies implemented in the region have impacted the proliferation of online jihadist propaganda activities.

Although this has tackled the immediate issue of people leaving to join terrorist groups in the Levant, it does not solve the long-term threat of violent extremism. As foreign fighters and their families return home, Western Balkan countries face a new security challenge: the deradicalization and reintegration of returnees. By 2017, at least 310 adults had returned to the region and it was estimated that another 460 – mostly women and children – remained in the Middle East or have gone under the radar upon returning. Lack of knowhow, political will and funding has hindered the ability of local governments to establish effective programmes that respond to this challenge. Without a credible reintegration platform to ensure their disengagement to the groups they fought for, these individuals could pose a threat as future fighters or recruiters.

Furthermore, many of the underlying issues that cause people to radicalise in the first place, have not yet been addressed. Indeed, radicalisation is a complex process that is unique to every person, but experts have identified a number of recurring factors and dynamics. Generally, radicalisation is a social process that seeks solutions to grievances and unfulfilled emotional needs. Of vital importance in the process is the set of grievances, consisting of ‘societal tensions, conflicts, and fault lines, which may cause thwarted expectations, conflicts of identity, or feelings of injustice, marginalisation and exclusion’. These grievances are still very much prevalent in the region.

Discontent of the people

The sluggish transition from communist rule to democratic rule and an open economy, along with the violent conflicts in former Yugoslavia have halted progress and created new grievances. For many in the Western Balkans, change does not come quick enough while socio-economic opportunities remain scarce. Faced with difficult prospects at home many seek opportunities in Western Europe or North America. Albania, for example, ranks second in the world for the percentage of its population wanting to emigrate. More than half of Albanians would want to leave the country for a better life elsewhere. High unemployment, corruption and unfair treatment by the government and courts are among the most often-cited reasons for leaving.

A recent study by IDM Albania, noted that increasingly, Albanians perceive that they are falling behind. Notably, more than 85% of respondents reported that households in their community are not fulfilling their basic needs. This does not come as a surprise in a country where the minimal wage of 180 euro is not enough to feed an average family, let alone rent an apartment or pay for education. Even well-educated graduates spend years finding a decent job, often settling for an underpaid job they are grossly overqualified for.

Surprisingly, there is little reporting of Islamic violent extremism in the country. Between 2012 and 2017, 144 individuals left for Iraq and Syria, a significantly lower number than other Muslim-majority countries in the region. Due to its history of state-enforced atheism in the country, most Albanians live a secular life and have a loose interpretation of religious norms and considerations. It is argued that a strong catalyst for the foreign fighter issue in Albania was the preaching of Wahhabism/Salafism in mosques financed by religious funds from Turkey or Gulf countries. These mosques operated outside the control of the Albanian Muslim Community – an issue that has now largely been solved.

Nationalism as the next frontier

This does not imply that other types of violent extremism are not an issue. When we look at the region as a whole, radicalisation in the Western Balkans also affects non-Muslim communities. In the past year, media reports have shown that some individuals from the Christian Orthodox Slavic community have joined the conflict in Ukraine in support of pro-Russian or pro-Ukrainian forces fighting there. It is increasingly evident that in order to effectively prevent and counter violent extremism, local governments, civil society organisations and practitioners must envision a larger scope involving more than just Islamic radicalism.

Particularly concerning is ethno-nationalist extremism, which is on the rise in the region. Unresolved issues such as the tripartition of Bosnia and tensions between Serbia and Kosovo continue to pose a challenge to the security of the region. In 2017, the legislative amendments making Albanian an official language in Macedonia underlined this threat, as even legislators in support of this amendment themselves were a target to violent nationalists.

In the past year, several incidents related to nationalism were reported. In March, the Balkan pilgrimage of the Russian pro-Putin motorcycle club The Night Wolves sparked a lot of controversy as they travelled trough Serb-inhabited regions to “research the cultural influence of the Russian Empire in the Balkans” and visit Orthodox heritage sites. That is the same organisation that offered protection against potential aggression from pro-Kiev forces in Crimea after its annexation back in 2014.

A few weeks later, the Prespa Agreement between Greece and Macedonia, which aimed to resolve the long-standing name dispute between the two nations, sparked nationalist sentiments on both sides of the border. And just last month, the killing of an ethnic Greek by Albanian police forces – after he fired at them – increased tensions between the two countries, with accusations thrown on both sides. According to subsequent media reports, the deceased was an alleged member of a Greek far-right movement and was hailed as a hero by Greek nationalists. These incidents underpin the heightened potential for violence in a region with such fragile stability.

Although the gravity of the threat towards the region’s security, the almost tunnel-versioned focus on countering religious extremism seems to have taken away attention from another looming problem: Balkan nationalism. Underlying issues that drive people to violent extremism have not been tackled, which means that the Western Balkans is still fertile ground for violent extremist ideas. Even in Albania, a country known for its religious tolerance and harmony, there is no guarantee that violent extremism could not rise. But it may be in different forms than expected. The respective governments need to step up to tackle issues such as unfair distribution of opportunities, shamefully low minimum wages and corruption – or the consequences may be more far-reaching than just civic unrest.