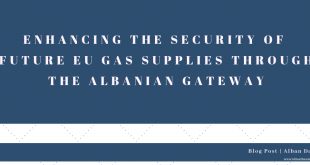 March 2019 – The Trans-Adriatic Pipeline (TAP) project is set to bring natural gas supplies from the Caspian Shah Deniz II field to Western Europe in 2020. The project, which is part of the Southern Gas Corridor (SGC), is considered as a crucial step to diversify EU gas supplies and – most importantly – substantially decrease Europe’s dependence on Russian gas. Another route which serves the same purpose is the East Med pipeline, which is set to bring gas from the offshore fields of Israel and Cyprus. Despite their importance in diversifying gas supplies to the EU and liquefying the internal gas market, these projects focus disproportionately on Western Europe at the expense of Central, Eastern and Southeastern Europe which are dependent on Russian gas thus subject to significant supply pressures and unfavorable market positions.

The Ionian – Adriatic Pipeline (IAP), planned as a northern branch off TAP, is to supply gas from Albania to Croatia through Montenegro will have a positive effect in securing gas supplies to the Western Balkans, but not to Central and Eastern European states – at least as it is originally planned. This route, coupled with the evacuation pipeline from the LNG (Liquefied Natural Gas) plant at Krk Island, Croatia and the cross-border interconnector between Poland and Lithuania, could bring pipeline and LNG supplies from the Western Balkans to EU member states in Central and Eastern Europe.

Sitting at the crossroad of two increasingly important energy routes which bring natural gas from Central Asia to Europe – namely TAP and IAP – Albania is key to the expansion of the Southern Gas Corridor and has the potential to significantly contribute to the EU’s diversification and market integration strategies. Despite the expected improvements to gas supplies through IAP and cross-border interconnectors, the EU’s targets to decrease and eventually eliminate fossil fuels from its energy mix suggest that Central and Eastern European member states would not fully meet their needs as natural gas usage is expected to increase to compensate for the energy gap. Another important factor, which is expected to increase the demand for new sources and supply routes, is the decrease of gas supplies from Norway and other EU member states.

Although in its preparation phase, the project to build an underground natural gas storage project in a salt cavern in Dumrea seems promising to succeed.

While there have been discussions and plans concerning the establishment of LNG infrastructure, they have not led to concrete results thus far. The prospect to build an LNG FSRU (floating storage and regasification unit) was first considered by the Italian Gruppo Falcione. An agreement had been signed in December 2008 with the Albanian government for the construction of the Eagle LNG terminal off the Albania coast which would supply Italy with natural gas via a pipeline connecting the terminal with the region of Puglia. Its planned utilization, however, did not fully capture the potential of Albania as a transit country and entry point for LNG from the Middle East and North Africa.

The establishment of an LNG terminal would serve as an additional capacity to that of Krk Island, but most importantly it would further diversify the EU gas supplies by increasing LNG imports from the Middle East and North Africa.

As the gas supplies from Western European (Norway, UK, and The Netherlands) countries decrease in the next 10-15 years, Russia will be in a favorable position to compensate the ensuing gap. There are already established pipeline networks running through Bulgaria and Romania (Trans-Balkan Pipeline) which could transport Russian gas to Central European countries bypassing Ukraine as a result of the cross-border interconnector planned to link Bulgaria and Serbia, as well as Poland and Lithuania. The reverse flow interconnector between Greece and Bulgaria – originally designed to bring access to Bulgaria – could potentially be used to pipe in Russian gas through TAP. As TurkStream and NordStream 2 become operational, the Russian position as the prime supplier of natural gas to Europe will be further strengthened – potentially covering the future supply gap.

Under these conditions, Baltic and Central European countries will continue to be reliant on a single supplier, while diversification of supplies and sources for the European market will be challenging. The expansion of SGC through new support infrastructure and new routes from Albania could substantially improve the market position of Visegrad countries, as well as Baltic countries, by diversifying their suppliers and supply routes whilst contributing to the diversification of supplies to the European market.

Albania’s newfound position as a transit country ought to be exploited to meet future market needs. Due to substantial geo-political and geo-economic changes since 2008, the projects concerning LNG and natural gas storage in Albania need to be reevaluated and designed to reflect current and future challenges to security of energy supplies for Europe, as well as prospects for greater cooperation and integration within the Western Balkans countries.