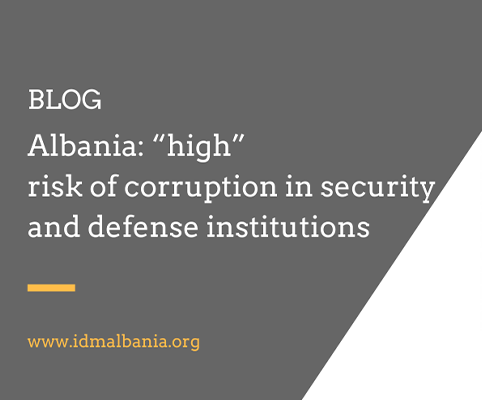 December 2020 – On the international day against corruption, on 9 December 2020, Transparency International published its report on Government Defense Integrity Index (GDI), for Central and Eastern Europe, in which Albania is also included.

The report analyzes corruption risks that countries face in the defense sector, measures the effectiveness of defense governance, and offers practical guidelines for reducing corruption risks in this sector. The report measures integrity risks in the defense and security institutions throughout 5 categories: political, financial, personnel, operations and procurements.

The GDI uses a consolidated methodology comprised of 77 questions, each divided into subcategories, totaling over 200 data points for each country assessment. The Index ranks corruption risk according to 6 general categories ranging from “very low” to “critical”. 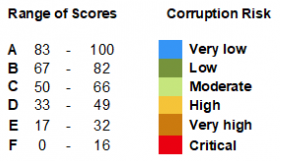 The study assesses the period between September 2018 and September 2019 and comes at a time when the economic, political and social crises in Albania (natural disasters, political unipolarity, COVID-19 and the ensuing economic crisis), have shifted public attention away from this sector, although it remains instrumental to the economic, security and foreign policy of the country. The problems observed in the report highlight the need to not forsake this important sector and to re-engage with it, in order to mitigate future corruption risks and potential government malpractices.

Albania presents a “moderate” corruption risk in the Personnel category and “critical” risk in the Operations category. It is worth mentioning that Operations presents the highest risk of corruption across all countries assessed in this report. In the case of Albania, this risk arises from the lack of specific doctrines which consider corruption as an issue of strategic and operational importance, as well as due to lack of trainings on corruption prevention in military operations. Procurements and Finances are also two important categories with “high” risk level for Albania, mainly due to low transparency on procurements, inconsistent and ineffective parliamentary oversight, and an overarching tendency to over-classify information in the defense and security institutions.

With regards to Parliamentary oversight, the legislation, although not exhaustive, lacks appropriate implementation. As a result, parliamentary commissions do not fully exercise their formal rights such as investigations, hearings, active participation in strategic decision-making, exchanging detailed information exchange, and continuous monitoring of defense policies. In the case of Albania, as well as in other Western Balkans countries, there is a noticeable “tendency for parliaments to align themselves with the executive on defence matters” (pg. 8), to the point that it appears they are “content to rubberstamp executive-driven legislation” (pg. 8). The report highlights that Albania’s National Security Committee has few qualified experts on defense issues and that their ability to effectively hold institutions accountable is limited by their allegiances to political parties (pg. 9).

The report expresses concern that given a poor financial management and weak external oversight of defense procurements, the risk of corruption in the defense sector could multiply, especially when taking under consideration that Albania has committed to fulfil NATOs objective of increasing procurements to at least 20% of the country’s defense budget (pg. 13). More specifically, a continuing problem for Albania is the fact that defense procurement plans are not clearly supported by the National Defense Strategy, which might result in many last-minute changes to the procurement plans (pg. 14), and that the current defense legislation might be use to exclude defense procurements from the normal public procurement procedures, thus limiting the possibility of effective external oversight (pg. 16). TI suggests that enhanced transparency and accountability can increase competitiveness in the defense sector, reduce acquisition costs and offer local industries a greater opportunities to develop and support the need of the defense sector (pg. 16).

Public access to information over the defense sector continues to remain under threat in Central and Eastern Europe due to the tendency to over-classify institutional information (pg. 4). However, the report suggests that although the public’s right to information and national security have historically been viewed as “pulling in opposite directions” – as one advocates for secrecy and the other for transparency – in reality they can both contribute to national security by enabling protection of critical national security information, on one hand, and preventing the veil of secrecy from shielding government malpractices, deception and corruption, on the other (pg. 19). In Albania, the Ministry of Defense does not public its budget, and the version released by the Ministry of Finance is too aggregated to offer enough information and justification on defense procurements (pg. 20). Albania and the other countries in Central and Eastern Europe offer limited access to information on the defense sector by abusing regulations on the classification of information. According to TI, overclassification not only limits access to public information but also hinders the ability of oversight institutions to monitor the defense sector (pg. 22).

This report from Transparency International is particularly important for Albania as it warns of the many governance problems in the defense sector even 11 years after our NATO accession, and emphasizes the need to refocus attention towards security and defense institutions. The Government Defense Integrity Index claims that Albania faces a “high” risk of corruption in security and defense institutions; this due to weak mechanism for controlling risk such as: ineffective parliamentary oversight, opaque procurement procedures, reduced transparency and public accountability though abuse of overclassification, and negligence towards corruption risks in defense policies and military operations.

The Spinning Funding Mechanism: Civic Space and Good-Governance in Local Milieus in Albania