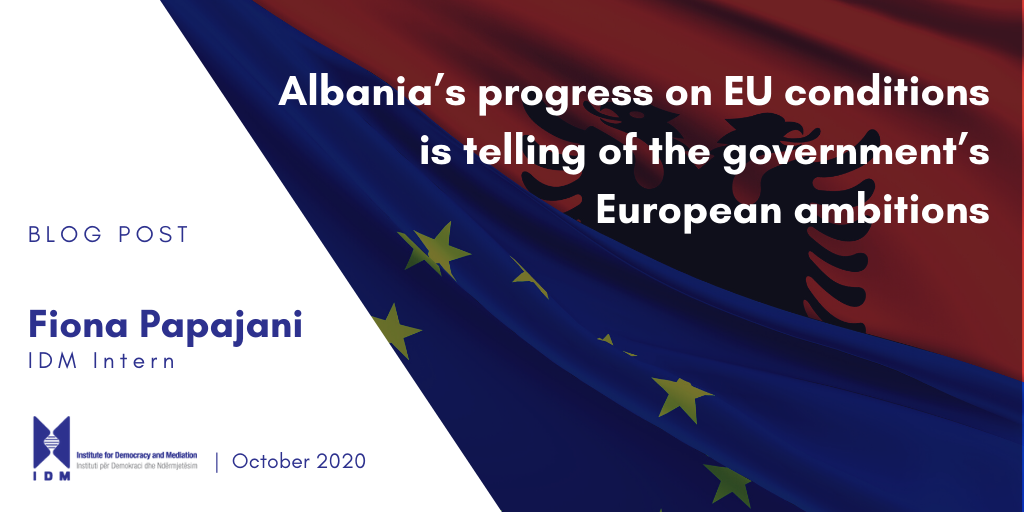 The European Commission’s 2020 Report on Albania continues to echo concerns on the overall scope of democratic deficit and polarized political environment; those same concerns shared by the European Council in March this year and part of the 15 criteria that Albania needs to fulfil in order to start EU accession talks.

Albania submitted its formal application for EU Membership in April 2009. Nevertheless, the prospect of starting negotiations talks hit a 6-year plateau, as persistent lack of political consensus, continuous calls for “free and fair” elections, as well the Commission’s vocal concerns over “selective justice and corruption” were jeopardising its progress.

Ultimately, the Member States and European Union are vindicated from potential delays as the criteria have been unanimously defined. The Albanian government will have none to blame but its own lack of results, should the first intergovernmental conference be postponed after the upcoming parliamentary elections.

The necessity for democratic consolidation

Albania continues to show insufficient progress in fulfilling the recommendations given by the monitoring mission OSCE/ODIHR on ensuring free and fair elections, with the integrity of the electoral process, eliminating the longstanding problem of misuse of administrative resources and voter pressure being at the top of the agenda.

Unfortunately, the 2019 Local Elections were again accompanied with hostility, as the opposition refused to participate, accusing the governing party of lack of electoral transparency and voter buying. In the midst of political chaos, the Albanian citizens, who once more did not have the opportunity to experience a “free” election by not having much of a choice in the voting candidate, boycotted the election through a substantial number of blank votes and an overall low voter turnout of just 21.6%. This election, much to the fate of the 2015 elections, was followed by reoccurring protests organised by the opposition party, oftentimes violent and directed to the state institutions that ignited the political turmoil and unrest in the country.

The same polarised climate held Albania back in the advancing of the Electoral Reform, which aimed to reduce the encountered “technical” issues such as voter registration, counting of votes, and electoral administration for quite some time. After considerate lack of communication and cooperation between the main parties, with the opposition oftentimes boycotting the agreements the reform passed on June 5th 2020. Although a step in the right direction, the reform was yet unable to meet the majority of the requirements made by OSCE/ODIHR.

Corruption in the judicial branch

While the Albanian parliament has passed several reforms and implemented laws that aimed to eradicate corruption in the state apparatus and administration, the country has dropped 23 places in 3 years in the Transparency International Corruption Perception Index. With a score of 35 out of 100 points, Albania is one of the most corrupted countries in the region, whose average ranks at a total of 66 points. This casts serious doubts on whether the policy implementations have yielded any concrete effects on the progress on the country’s struggles with a conflict of interest, abuse of state resources and insufficient disclosure. Particularly, as these are also witnessed through the Judicial Reform, whose slow-paced progress of the vetting of judges and prosecutors is a credit to the complex nature of each individual case related to the aforementioned issues. As a result of the large number of vacancies, the country’s judicial branch has been left crippled, with the High Court only regaining its quorum as of late and the Constitutional Court still missing five members in order to restart operating.

With a one-party led parliament and a frozen judicial branch, the risk of power abuse grows worryingly, as the rule of law is left defenceless and the country’s democratic legitimacy is at stake.

The Venice Commission continues to voice its concern over the hostile media climate of Albania, which is gravely affected by the intertwinement of personal interests and political affiliations, resulting in self- censorship. The current Media Law, also referred to as the “anti-defamation” package, will deteriorate the situation further by undermining the freedom and authority of the press. The law, which passed in the Albanian parliament at the end of 2019 but was returned by the President for the same reasons mentioned by the Venice Commission, is said to tackle and reduce fake news and defamatory content, by creating a state administrative body that can judge the news content and fine online platforms. In doing so, it puts the media under the control of the Audiovisual Media Authority (AMA), whose members are appointed by the government, whilst the pressure and execution of exorbitant monetary fines can easily lead to the insolvency of online media outlets.

Foreign organisations such as the OSCE Presence, the European Federation of Journalists and many others have raised their concerns over the law package, which the government is still trying to pass in the parliament, causing Albania to drop two places on the 2020 World Press Freedom Index. These policies come after a long history of verbal attacks towards critical journalists, by politicians both in power and in opposition, in a country that is still struggling to establish editorial independence. The amendments are currently under the revision of the expertise of the Venice Commission and will be re-discussed later this year.

As Albania enters the 11th year in its journey to EU Membership, it has become clear that the only way for the country to progress is by solving its internal disputes. With a newly reformed European integration process, Brussel’s request for insurance of a consolidated democracy from its candidate states has become even more evident. The country’s deeply polarised political climate and continuous lack of cooperation between the two main parties not only delays policy implementations but it also hinders political stability and reforms. One the other hand, the media, being the main actors in the “anti-defamation” law package, have been excluded from the dialogue and are currently under the threat of imposed censorship and state control as opposed to the possibility of self- regulation. Yet Albania’s most pressing matter continues to be the necessity of the reinstitution of the power balances, through the immediate filling of the vacancies in the Constitutional Court as well as progressing with the implementation of the Judicial reform and fight against corruption, as has done in the past three years.

The timing of the start for accession talks can now only be determined by the government’s willingness to foster open dialogue and work towards ensuring a more stabilised political environment.

Leaflet on IDM’s activity and departments over years