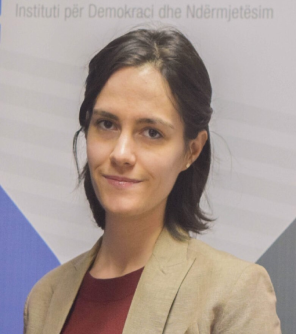 Iliada Korçari works as a researcher and project coordinator at the Institute for Democracy and Mediation, where she focuses on governance and area studies. Her main research interests are nationalism, state-building, and modern and contemporary thought.

She has worked in the public administration cultural policy sector for several years; was engaged as a freelance researcher in different research projects and has been teaching seminars of Nationalism and Identity at the University of Tirana, Department of Political Sciences, since 2015.

Iliada has a double-major in Political Sciences and Public Relations and Communication and has graduated in Political Theory, MSc. and Russian and East European Studies, MSc., being a holder of many scholarships.

She is a proficient user of Albanian (native), English, Italian and Spanish, an independent user of French and basic user of German and Bulgarian.