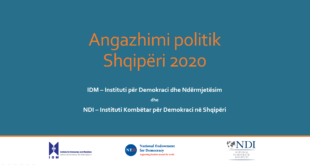 December 2020 – The Institute for Democracy and Mediation (IDM) and the National Democratic Institute (NDI) office in Albania, carried out for the second time the Survey of Political Engagement in Albania. This study was successfully piloted by IDM in 2016 and is modelled on the Hansard Society Audit of Political Engagement series in the United Kingdom. It measures the country’s “political pulse” through exploring public attitudes towards a range of political engagement indicators that track citizens’ knowledge of and interest in the political system; the degree of public action and participation in politics; and the public’s sense of efficacy and satisfaction with institutions and processes.

The fieldwork was conducted in June 2020 with a nationally representative sample of 1536 citizens and an updated instrument touching upon sensitive and important political issues such as political party integrity, open lists, citizens’ protests etc.

USAID Releases the 16th Edition of the CSO Sustainability Index