“Results Based Management in the State Police” 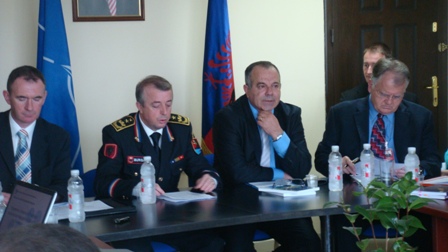 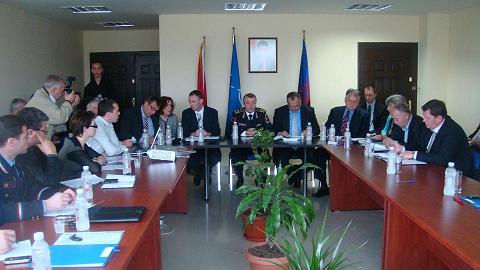 IDM in close cooperation with Police Assistance Mission of the European Community to Albania (PAMECA) and International Criminal Investigative Training Assistance Program (ICITAP), supported by the State Police Headquarters, organized in Tirana on April 23rd in the premises of General Police Directorate, the round table on the best practices related to Results Based Management (RBM). The round-table was attended by approximately 35-40 key leading figures of Police Directorates of different regions in Albania, General Secretary of Ministry of Interior accompanied by heads of various departments in the MoI, representatives of PAMECA and ICITAP etc.

The round-table on purpose was organized without media attendance in order to boost and engage in open debates and discussions the leading officials. The aim of this event was to raise the awareness of the high officials in regards to the best practices of RBM that would improve the performance in the State Police. On the other hand the meeting aspired to achieve a broad consensus amid the high officials in regards to the priorities for developing of a consolidated system of RBM. Despite the general perspective that RBM covers, the discussions and presentations were mostly focused on the state police activity. The priority that the activity of state police be driven by RBM was seen as the main challenge of the future reform in this sector.
The opening remarks were addressed by General Director of the State Police Mr. Hysni Burgaj. He stressed the importance of RBM to be adopted in the everyday practices of institutional activity in the State Police. “Although RBM is a new philosophy, today we are aware that is time to be adopted, implemented and applied in the structures of State Police in Albania” – said Burgaj. The General Director presented some of the most important achievements of the State Police in this field, stressing the new practices related to police activity assessment in various levels. From a very formal and ineffective assessment of the police work during the past, today the evaluation of state police is conducted according to specific concrete parameters that aim an individual and realistic assessment of the police officer’s performance in all the levels. On the other hand Burgaj mentioned the open and transparent policy related to the human resources management according to well-established guidelines and regulations related to the recruitment, promotion and nomination in this body. Referring to Burgaj today the state police assessment is appointed to a recent established body – Directory of Standardization – which is an independent body ensuring integrity in the process.

Executive Director of IDM, Mr Sotiraq Hroni appreciated the ongoing close cooperation with State Police and supporting international structures: ICITAP and PAMECA. He stated the purpose of this activity is not to achieve a total change of the institutional practices, but to present the principles of PBM in the field aiming a gradual transformation of public authorities based on PBM. For the first time in Albania the State Police are willing to embrace the perspectives of PBM, stressed Hroni.

The first presentation was conducted by Mr. Agron Sojati, member of the Security Monitoring Network who worked on the research study during the first phase of the project in regards to results based management in the security sector. He presented the main findings and key theories providing a general understanding of Performance Based Management Mr. Sojati noted the phases to be followed during the implementation of a PBM scheme by underlining main elements in the work of the police.

The second presentation was conducted by Mr. Mark Brandley, high representative of  PAMECA who briefed and reviewed some of the most important issues found in the book “Challenges of the Assessmewnt of State Police Performance”. Mr. Brandly provided some practical comments on the key challenges that State Police might face in the process of PBM. His experience and knowldege in this field was pivotal to apply the theoritical approach with practical examples.

The third presentation was conducted by Mrs. Manjola Stefani – expert of Organizational Development (IDM) which presented to the audience the PBM model in the framework of the guidelines and principles of the business activity. By applying the relation bussiness Vs client principles and philosophy in the activity of state police, the performance of the latter would be improved.

Mr. David Thompson from ICITAP shared his experience in the field of RMB in the police sector by advocating the advantages and benefits of applying an effective model of PBM in all the adimnistrative structures of State Police.
Dr. Hasan Shkembi from the Police Academy addressed the audience with a brief presentation on the current applied model of results based management in the Albanian Police. He made an overview of the steps that PBM has followed in Albanian police in the last 10 years by noting the reasons and the factors hiding behind the reform.

The last session was dedicated to an open discussion where the directors of the regional police departments expressed their opinion concerning the implementation of PBM in the respective districts in Albania. Mr Anelli, Police Director of Peshkopia District noted that the process of introucing and applying the principles of PBM needs to follow a step by step course. Other police directors from various districts proposed that PBM to be institutionalized in strategic documents such as Action Plans or Strategies. On the other hand Vice General Director of the State Police, who mediated the last session, posed the need that police staff be trained on how to develop PBM in their daily activity, and a wide awareness raising campaing that this model represents.

Training of Trainers for Health Mediators