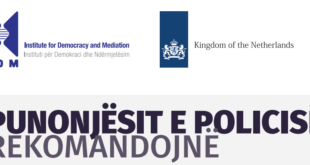 January 2021 – This brief provides a set of recommendations to support the findings of the “Building Integrity to Improve Performance and Sustainability of Anti-Corruption in the Albanian State Police” Project supported by the Embassy of The Netherlands in Albania. The document is the result of several years of work and is conceptualized as a guide for public decision-making authorities in adopting policies to strengthen the integrity of the State Police. The presented recommendations are conclusive of suggestions and discussions conducted with police officers in the course of performing activities for specific components of the project.
In this context, the Institute for Democracy and Mediation held several roundtables with police officers of various ranks and levels on issues linked with the implementation of mechanisms of police integrity and
ethics. Conducted during July 2019-January 2021, these roundtables produced a comprehensive database on police integrity, on the fight against corruption in the State Police, and on other challenges confronting the police, including ethics, performance, and other mechanisms of integrity.

This recommendation brief was prepared in the framework of the “Building Integrity to Improve Performance and Sustainability of Anti-Corruption in the Albanian State Police” Project supported by the Ministry of Foreign Affairs of the Kingdom of the Netherlands. The project objectives, implementation, and results are the full responsibility of the implementing organization – the Institute for Democracy and Mediation.
The attitudes and opinions expressed in this document belong to the actors involved in the project implementation and do not necessarily represent those of the Government of the Netherlands.