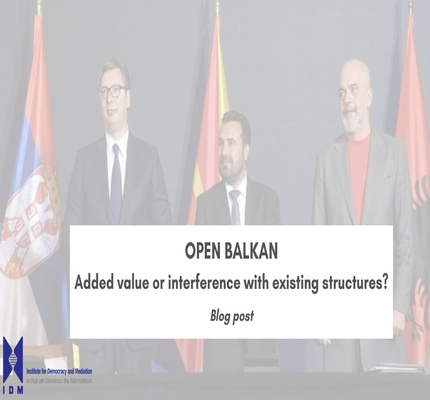 Context of regional cooperation in the Western Balkans

In view of the unpredictability of the EU accession process for the Western Balkans, the attention is shifted towards regional cooperation as an intermediary exercise before joining the Union. In this context, the Berlin Process was established to serve as a policy dialogue instrument aiming at converging the region with the EU in socio-economic terms, ultimately facilitating the accession process. Regional cooperation is substantially based on the European integration model, therefore adopting an economic and trade-centered approach to generate spill-over effects. In the Sofia Summit of the Berlin Process, the leaders of the region committed to the establishment of the Common Regional Market (CRM), an ambitious initiative aiming at intensifying economic cooperation based on the EU regulatory framework and preparing the region for accession to the EU Single Market. Building on the achievements of the previous Multi-Annual Action Plan for a Regional Economic Area (MAP REA), the CRM has already delivered significant achievements such as the green lanes[1] and the abolishing of roaming tariffs in the region. Although the work on the technical level advances at a steady pace, political deadlocks often impede progress.  In response to this, leaders of Albania, North Macedonia, and Serbia put forward the Open Balkan initiative[2], an intergovernmental platform created to advance the agenda of “Europeanisation”, irrespective of the pace of the accession negotiations and by avoiding the need for consensus on the regional level. However, the value of this initiative is disputable as it risks overlapping, complicating, or even interfering with existing projects such as the CRM.

How do these regional initiatives fare based on their key elements?

Ownership: Although national institutions are responsible for the implementation of the CRM, its development is coordinated by the Regional Cooperation Council (RCC) and the Secretariat of the Central European Free Trade Agreement (CEFTA), and is heavily supported by the European Commission, particularly by providing financial backing through the Economic and Investment Plan. Whereas, the Open Balkan is an attempt to increase the regional ownership of the transformational processes of the Western Balkans and the accession process in the EU. While consolidating local ownership is a welcomed intention, concerns are raised due to the non-inclusive nature of the project.

Political dynamic: It is not uncommon for promising and ambitious regional initiatives to be torpedoed by political meddling, a rather unfortunate feature of the Western Balkans. The proceedings of the Berlin Process and the work of CEFTA have not been immune to these episodes. The composition of CEFTA is quite problematic, as the Republic of Kosovo is represented by UNMIK, which has led the Kosovo government to boycott the ratification of CEFTA Additional Protocol 5 on trade facilitation and Additional Protocol 6 on trade in services. Whereas, the dialogue between Prishtina and Belgrade has often generated deadlocks in the Berlin Process, consequently disrupting the implementation of otherwise useful initiatives. The rationale of Open Balkan is to explore avenues for faster and untroubled regional economic cooperation by sidestepping impasses in the design or functioning of existing regional structures. However, this approach could potentially leave countries such as Kosovo and Bosnia and Herzegovina more exposed and vulnerable, as it would diminish their bargaining capacity. Therefore, with the necessary political will, the impending issues should be tackled within the existing structures.

Content: In terms of content, the CRM coherently follows the approach of the previous MAP REA. It aims to achieve trade liberalisation through the alignment of regulations based on the four freedoms, increasing the attractiveness of the region, bringing the Western Balkans closer to the pan-European digital environment, and modernising the region’s infrastructure. On the other hand, Open Balkan is presented prima facie as more ambitious, attempting to completely remove tariff and non-tariff barriers and fully harmonise the employment market of the region. But it is uncertain whether this ambition is compatible, or even feasible, with the work done so far by existing structures. While Open Balkan aims to remove all border duties, de facto creating a customs union, CEFTA has constantly held that such action is not beneficial for the region and will create later problems in integrating into the Single Market[3].

Inclusiveness: The CRM, under the umbrella of the Berlin Process, and CEFTA include all Western Balkan countries, whereas the Open Balkan initiative brings together only half of the region. Montenegro is reluctant to join the initiative as it feels it does not introduce anything new and wants to stay dedicated solely to the accession process, based on the (overly) ambitious objective of joining the Union by 2025. Kosovo and Bosnia and Herzegovina remain sceptic, with the former proposing developing CEFTA into SEFTA (Southeast Europe Free Trade Agreement) to keep the EU tightly engaged in the region and address the unequal treatment of Kosovo in CEFTA, which is forced to refer to the Western Balkan countries in depreciative terms such as “parties”, “territories” or “economies”.

Institutional infrastructure: The CRM has developed a comprehensive institutional infrastructure, with political backing coming from the Berlin Process’ yearly Summits, the regional coordination being handled by CEFTA, RCC, WBIF, the implementation advancing by the national institutions, and frequent technical expertise being provided by international instruments such as World Bank, OECD[4], ILO[5]. There is yet no clear indication of a consolidated institutional framework of the Open Balkan, which leads to the question of whether the institutional vacuum will be addressed by establishing new structures or, as many fear, by taking over existing structures. The latter would unnecessarily complicate the dynamic of regional cooperation in the Western Balkans.

Relation with EU: The EU, in particular the European Commission, regards the Berlin Process as a valuable framework for policy dialogue, socio-economic development, and reconciliation. During the Sofia Summit, the EU described the CRM as an ambitious regional economic integration project, aiming to turn the region into an area of free movement of people, goods, services, and capital, based on the EU example and standards[6]. Regarding the Open Balkan initiative, the EU has not taken a clear stance but has repeatedly stated that any initiative must be fully-inclusive.

Open Balkan: Necessity or a stunt?

While admittedly existing regional cooperation structures are relatively ineffective in certain aspects, such as the composition of CEFTA or the weak and limited (political) mandate of the RCC, it would be a misjudgment to assume that a new initiative is required to mitigate these circumstances. Open Balkan claims to build on the achievements and further complement the CRM by pursuing faster and deeper integration and convergence of regional economies. However, from the perspective of CEFTA and RCC, there is no need for an additional initiative if there is a clear political commitment to implement the existing action plans. There are also concerns about whether the programmatic framework of Open Balkan is fully compatible with the CRM or CEFTA. Overall, much remains unclear regarding the Open Balkan initiative position in the constellation of regional cooperation structures. Its concept is not thoroughly convincing. Its added value is questionable if the intention is to assume responsibility for the work of CEFTA, especially when resources are well-placed to release initiatives that are obstructed in existing venues.

Albania’s EU Membership Application : How late is too late?