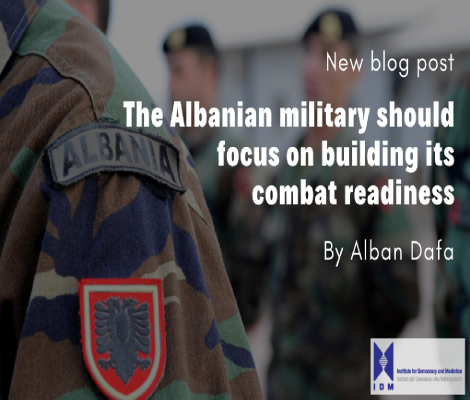 By Alban Dafa, researcher on governance and security

The engagement of Albanian Armed Forces in response to domestic security crises are fostering a distorted view of the military’s core tasks. The impression one gets from such deployments is that the main duty of the military is to respond to domestic emergencies rather than strengthen national defence.

The latest deployments – to secure the perimeter of Tirana International Airport after a robbery and to enforce the restriction measures in response to the COVID-19 pandemic – indicate an overuse of military resources and capacities. The increased engagement of the Albanian Armed Forces in civil emergency response or to counter security breaches in the country’s critical infrastructure risks depleting its core mission capabilities. It is imperative that the Albanian military reviews its policy on domestic security crises response to ensure that military capabilities are used judiciously without undermining the development of core combat and combat support capabilities.

Whose responsibility is it?

In April 2019, after armed robbers stole 10 million euros as the money was being loaded onto an aircraft on the tarmac of Tirana International Airport, the Military Police and Special Forces were deployed to secure the airport’s perimeter.  The Ministry of Defence claimed that the deployment of the military was based on its mandate to protect the country’s critical infrastructure and on the specific mandate of the Military Police to protect military facilities since the Air Force Command is located within the premises of the airport.

Despite these claims, the responsibility for the airport’s security remained unclear. According to the concession contract between the Albanian government and Tirana Airport Partners Ltd. (the concessionary company), the Albanian government undertakes the responsibility to deploy Military Police personnel to secure the airport in case of force majeure, which includes inter alia armed conflict, earthquakes, epidemics, and strikes. This is a peculiar provision given that the Albanian State Police (ASP) is the primary institution responsible for securing critical infrastructure (or ‘objects of special importance’ as per the law on the Albanian State Police). Furthermore, even if the ministry may justify the deployment of the Military Police by claiming that a breach in the airport’s security affects the security of the Albanian Air Force Command, such rationale does not justify the use of the Special Forces. While the Military Police has a legal mandate to secure military facilities, the Special Forces do not.

Similarly, the deployment of the military – including both combat and combat support units – to enforce the COVID-19-related curfew measures under civil emergency provisions was not clearly explained. It was unclear whether the military was needed to provide additional personnel, resources, or expertise to the Albanian State Police. Instead of a targeted engagement, the Armed Forces opted for the engagement of the broad spectrum of military capacities.

The nebulous nature of these deployments suggests that the strategy for the deployment of the military in domestic security crises is not clear. Without strategic clarity, the current approach risks overburdening the Albanian military and taxpayer.

Since 2009, consecutive Albanian governments have sought to downsize the military’s personnel and reallocate funds towards improving operational capacities on core combat tasks. Despite this apparent prioritization of combat readiness, the Albanian military has been increasingly tasked with civil emergency and – more broadly – domestic security crises response. This approach presents two challenges for the Ministry of Defence and the Armed Forces: (1) an operational challenge as these engagements exert pressure on an already underfunded and underequipped military, and (2) a financial challenge for being assigned tasks for which another institution is funded and is primarily responsible – namely, the Ministry of Interior.

According to the 2014 Strategic Defence Review, military personnel was projected to decrease from 10,190 (end of 2012) to 8,500 (2015) in order to build an ‘OPTIMUM’ force, i.e. a small, capable, professional, and interoperable force. This means building strong and efficient combat and combat support capabilities through training and procurement of new equipment. But there is a contradiction between the progressive reduction of military personnel and the military’s increased engagement in civil emergency response and in securing critical infrastructure. Assigning these tasks to a continuously shrinking and relatively underfunded force (see also the table below) contributes to mission creep: when a peripheral, or secondary, task risks becoming de facto a primary one as it overtakes the core mission tasks of the military.

Additionally, since the ASP is legally required to secure critical infrastructure, deploying the military for such tasks overburdens the Albanian taxpayer. While the taxpayer pays for the ASP to secure critical infrastructure, the government deploys military units for whom the taxpayer has not paid.  Given Albania’s limited financial resources, this is an inefficient use of military capabilities, which can contribute to their deterioration.

As military units are increasingly being deployed to respond to domestic security crises, they will likely be forced to shift their training focus to adapt to the new tasks and thus neglect the development of combat skills, which will be needed to respond to future threats.

Conflicting priorities between the long-term development of the military capabilities and the short-term needs to respond to crisis situations are also evident in the most recent military strategic documents: the Long-term Development Plan of the Albanian Armed Forces 2016-2025 and the 2019 Strategic Defence Review.

Similarly, the engagement of the Albanian military under state of emergency auspices is the second most important national defence objective outlined in the 2019 Strategic Defence Review. According to the Albanian constitution, the military may be deployed only after the state of emergency has been declared to respond to threats to the constitutional order and public safety. While the preservation of the constitutional order is an important task for which the military must be surely prepared, the military is engaged “only if police forces are unable to restore law and order” – under article 173, paragraph 2 of the constitution. Since such engagement is a measure of last resort, placing it as a top national defence objective seems rather misplaced.

As civil emergency response capacities are prioritized and the support to domestic law enforcement authorities is set as one of the top national defence priorities, operational and tactical readiness to meet the challenges of an increasingly uncertain and challenging security environment have been neglected. The primary national defence objective under the 2019 Strategic Defence Review – securing the defence, sovereignty, and territorial integrity of Albania – rests almost exclusively on NATO’s shoulders.

Contributing to the Alliance is indispensable for Albania’s strategic posture, but the policy outlined in these documents does not fully appreciate and account for national defence needs in personnel, training, and equipment.  The documents suggest that Albania’s defence policy has placed the strategic burden for Albania’s national defence on NATO as the mission of the Albanian military is gradually shifting towards intervening in domestic security crises.

A renewed focus on national defence capabilities is also beneficial for domestic security crisis response because military units would be better trained and equipped. Consequently, both combat and combat support units could be deployed more effectively to respond to civil emergencies or threats to the country’s critical infrastructure.

Fundamentally, the present focus on planning for crisis response whilst neglecting the development of combat readiness will achieve neither. Without developing combat capabilities, the present resources –in personnel and equipment – will be insufficient to respond to domestic security crises. These resources will continue to deteriorate as they will be consumed by excessive use, hence undermining both crisis response and combat readiness.

Assessment of Impact of Decentralization: Indicators