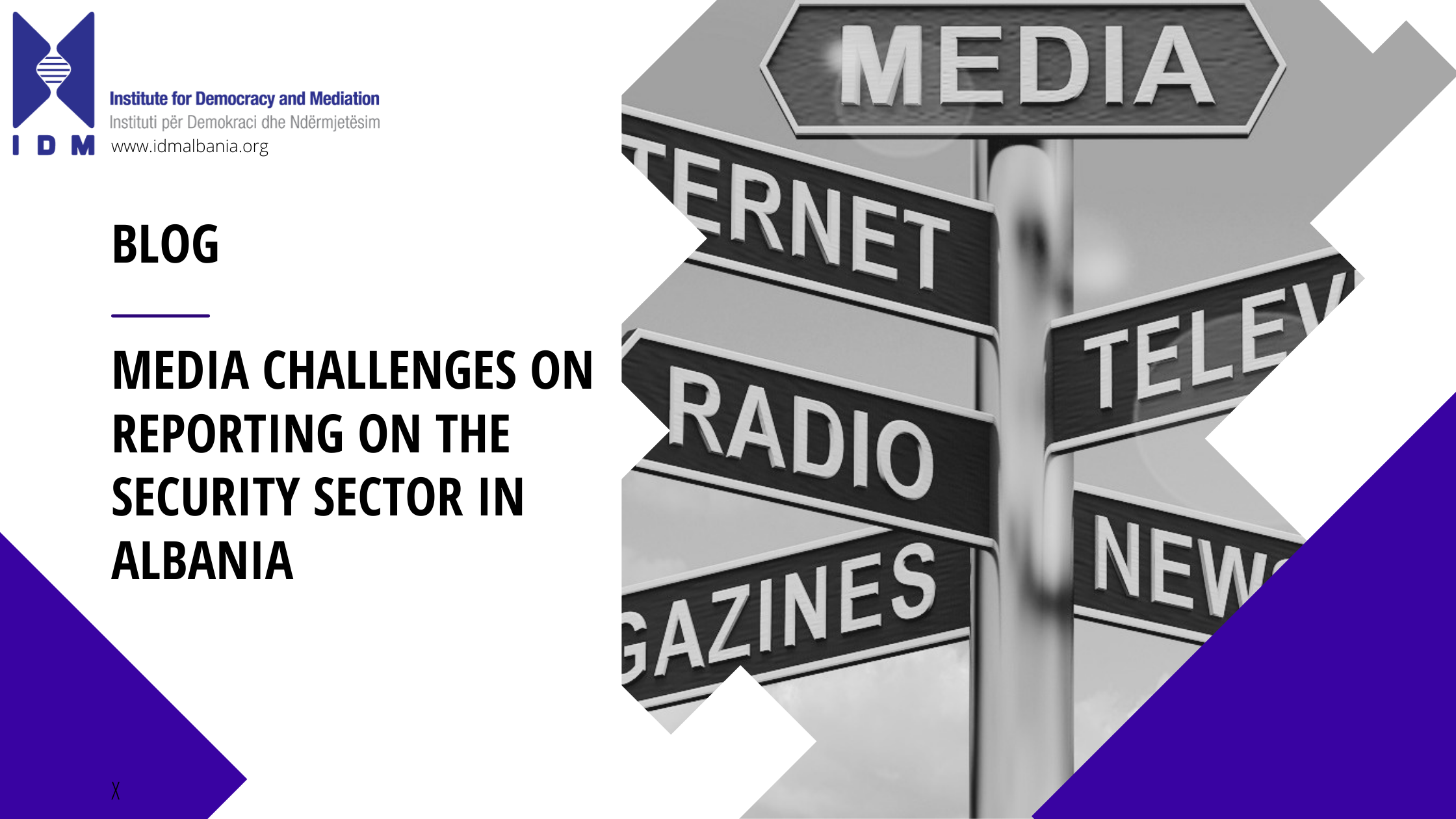 Media challenges on reporting on the security sector in Albania

April 2021 – Media plays a critical role in informing the public and building trust in the democratic institutions of a country. Similarly, the security sector is an important institutional domain encompassing a wide range of issues, from public safety to national security; therefore, naturally, nations dedicate considerable resources (human and financial) to this sector. However, regardless of its importance, media in Albania provides little coverage of the security sector, creating a significant void of information about their work.

Although, the nature of work within this sector might allude to greater secrecy, it is important that they remain just as accountable and as transparent as possible to the public; hence, media reporting on their activity should be more consistent. Unfortunately, the “selective attention” over security issues in Albania has impacted the information gap in the mainstream media causing this domain to be neglected by journalists and citizens to be less informed and connected with security institutions, ultimately leading to such institutions being less accountable to the public.[1]

Although there appear to be many reasons for limited coverage of security issues in media outlets in Albania, they can generally be grouped into three main categories: lack of editorial interest, institutional hermeticism, and limited journalistic capacities.

Editorial interest nowadays hinges on a variety of factors, only one of which being public interest; a term which in recent years has become “more ambiguous with the introduction of fast news”.[2] Public interest is becoming more and more synonymous with public attention rather than the right of citizens to be informed about issues which might have a social, political or economic impact on their lives. Furthermore, there is a tendency of editorial offices to deliver easy-to-read information for attracting traffic. Most journalists would agree that the first factor shaping editorial interest for news outlets nowadays is whatever can grab the public’s attention.[3] Therefore, editors tent to focus on popular news, while the security sector appears to be of little interest to most citizens unless it somehow directly affects their lives or alternatively produces scandals that journalists can use as a ‘scoop’. As one journalist would bluntly summarize it, “unless something ‘blows up’” within the security sector, editors will not consider it as news-worthy.[4]

A second factor influencing editorial interest is the media agenda of news outlets, which might be shaped by various political and economic interests. Quite often, news is shaped to keep readers engaged and entertained, with news that is as simple to understand as possible, rather than inform them. It appears that this journalistic constrain might be a reason why the security sector lacks thorough coverage by media outlets, which has led Journalist like Fatjona Mejdini to suggest that:

” the Albanian media [might] have lost its compass regarding important topics that need to be covered to inform citizens; instead, today, the media is trying to entertain citizens by chasing sensational news. Considering this, it is not surprising that topics related to security are not a priority on their agenda”.[5]

In general, due to pre-determined agendas, news outlets shape the nature of what gets reported, thus, directing the public’s attention to what they consider essential.[6] However, consistent emphasis on specific issues, can unfortunately fosters an environment in which journalists have to adhere to self-censorship by avoiding the coverage of specific types of news.[7] This appears to also be the case with coverage of the security sector in Albania where journalist admit to “easily turning a blind eye to security issues, [which] is not so much related to the lack of experience but rather the lack of media interest.”[8] Other journalist also confirm that the relationship between governments, industry, and media drives journalists to self-censor and to steer the audience towards collecting soft news such as daily politics and entertainment, “leading to a vacuum in reporting major issues such as high level corruption, linkages between politics and organized crime, clientelism, or other issues commonly found within the security sector.”[9] In fact, for some journalist, “fear of losing one’s job by stepping on important people’s toes” is another enabling factors to self-censorship.[10]

A second major factor inhibiting the coverage of security issues in media outlets is the hermetic nature of security institutions and their tendency to refuse requests for information on the basis that it is classified.[11] Although access to public information is well regulated under the law (Law no. 119/2014 ‘On the Right to Information’), in reality, access to information is often denied or prolonged when inquiring on issues pertaining the security sector. There have been many instances in which the state authorities have denied journalists information on sensitive topics, by creating bureaucratic barriers and even unnecessarily overclassifying information; when it is released, it is outdated to the point that it inherently becomes irrelevant for news reporting.[12] Additionally, security institutions create a challenging environment which discourages journalist from reporting on their activity “by releasing generic and unimportant details, issuing statements without media presence, or even not allocating time for questions”.[13] Unfortunately, over the course of years this appears to have caused many media outlets to lose interest on the activity of security institutions. Lastly, there have been cases of security officials pressuring journalist to not publish certain news – a tactic that can sometimes work – resulting in news being withdrawn before their release.[14]

Finally, limited journalistic capacities are also an important factor affecting the low level of coverage of the security sector. Working with the security sector is in itself very challenging for most journalist because it requires both specialized understating of issues and institutions, as well as, extensive preparation work for the most part. Unfortunately, such journalism requires time and money – something that media owners apparently don’t have much of – which is why there is a decline in the number of journalists specializing on security issues. In addition, handling security related news calls for a certain degree of competence which is acquired from trainings, and experience, but unfortunately this seems to be lacking in Albania.[15] For example, review of security sector policies is very rarely covered in Albanian media, partly because there is no dedicated space in the news section for this domain. This is why most journalist would concur that dedicating specific human resources to security issues is a luxury that media outlets cannot afford.[16]

Why is it important?

Having a strong independent media to scrutinize the work of the security sector, is fundamental to transparency and accountability in a democracy. The security domain covers a wide variety of topics that can affect citizens’ lives on a daily basis, such as: national security, public safety, criminal justice, institutional reform – which is why it is important for them to be informed on these issues and on how their government approaches them. Media can help direct citizens’ attention by raising awareness of critical problems and ensuring that security institutions are functioning effectively, thus, making the government and institutions more responsive and improving their trust in public institutions.

However, Albanian media news outlets have a long road ahead before effectively reporting on the security sector. Lack of journalistic capacities, conflicting media agendas, and limited editorial interest, has cause the security sector to be highly under-covered in Albania. Unfortunately, this can create favorable conditions for the exploitation of the security sector as well as for the diminishing of overall public safety.

Media outlets would do the Albanian public a great service if they dedicated more resources and space to reporting on the security sector. Not only would it help citizens turn their attention to this forsaken sector of governance, but perhaps strengthen the trust and credibility of people for them.

[1]   Arsen Rusta, a journalist for Report TV in Albania, covers, and reports on the judicial and crime (written type interview).

[3]   Group discussion with four professional journalists, they all agreed that, across the board, editors are interested primarily on news that get ‘clicks’ and views above all else.

[7]   BIRN Albania (2015). A Blind Eye on News: Self-Censorship in the Albanian Media https://birn.eu.com/wp-content/uploads/2017/05/Report-on-self-censorship-in-the-Albanian-media.pdf

[8]   Interviewee 2: findings from a written type interview with a journalist from visual media in Albania who covers issues of security

[10]   Interviewee 4: investigative journalist reporting on their experience with the Defense sector (L.C.)

[12]   Interviewee 4: investigative journalist reporting on their experience with the Defense sector (L.C.)

[13]   Arsen Rusta, a journalist for Report TV in Albania, covers, and reports on the judicial and crime (written type interview).

[14]   Interviewee 2: findings from a written type interview with a journalist from visual media in Albania who covers issues of security.