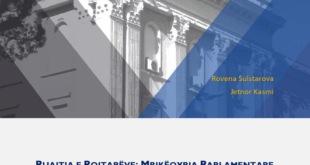 Guarding the Guardians: Parliamentary Oversight of Independent Institutions in Albania

The selected institutions include the Supreme State Audit (SSA), the Ombudsman, the Commissioner for Information and Personal Data Protection (CIPDP), and the Commissioner for Protection against Discrimination (CPD). These independent institutions were selected as they cover important areas of public interest, such as public finance management and human rights. They are also among the most consolidated bodies and are closer to the public given that their recommendations or reports are often communicated to the public through the media.

This document was prepared by the Institute for Democracy and Mediation with the support of Hanns Seidel Foundation Albania. Any opinion or views expressed in this project belongs to the implementing organization and does not necessarily represent the views of the Foundation.