March 16, 2018 – The Institute for Democracy and Mediation and United Nations Development Programme presented the findings of the Opinion Poll “Trust in Governance 2017” conducted in November 2017. 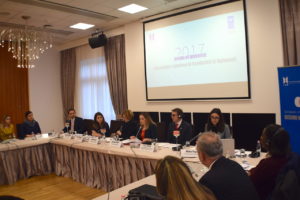 Findings reveal that public institutions that enjoy the highest trust are: Armed Forces (63%), Education system (63%), (54%) Healthcare (53%), and State Police (53%). The Prosecutor (22%), Courts (21%) and Political Parties (21%) result to be the least trusted institutions. Regarding other public institutions, the most trusted ones are Religious Institutions (76%), followed by Civil Society Organization (57%) and Media (54%).

Compared to 2016, the proportion of respondents that trust their Local Government stands unchanged at 49%.

Regarding the Judicial Reform, perceptions on its effective implementation in practice continue to be divisive, with 43% of respondents stating that the Justice Reform will be implemented accordingly and 38% believing the opposite.

During 2017, Courts are perceived as the most vulnerable to political influence (72%), followed by the Prosecutor (69%) and the State Police (49%). 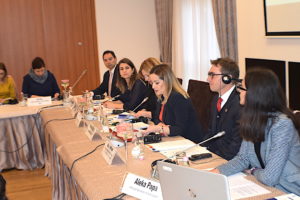 Regarding the credibility of media reporting, one in every two respondents (50%) believe that the information provided by media is accurate and truthful. However, compared to the last year, media has seen a decrease of 4 percentage points.

Asked in an open-ended question, 21% of the respondents considered Courts as the most corrupt public institution in Albania for 2017, followed by the Government (16%), Health System (14%), and the Parliament (9%).

Ms.Senida Mesi, Deputy Prime Minister of Albania, Ms.Vasilika Hysi, Vice-Speaker of the Parliament of Albania, Mr.Brian J. Williams, UN Resident Coordinator & UNDP Resident Representative in Albania, representatives from the Ombudsman and from the Information and Data Protection Commissioner, representatives from public authorities, civil society, academia and media attended the event. In her speech, Deputy Prime Minister of Albania, Ms. Senida Mesi remarked that “…by re-creating a new system of values, we are curing the sentiments of cynicism and mistrust against the state: Albanians need and deserve high-quality, modernized and digital services that facilitate their lives and work in order to increase trust in services and public administration.” She proposed to focus the next-year survey on public services offered at the central level.

Ms. Vasilika Hysi, Vice- Speaker of the Parliament of Albania, said that “We have the obligation and we have also taken a commitment to take into account every study, assessment, or monitoring undertaken by both international or domestic institutions…” Ms. Hysi added that with the adoption of the Code of Ethics, public confidence in the performance of the Parliament will increase.

The UN Resident Coordinator and UNDP Resident Representative in Albania, Brian Williams underlined: that “The 5-year trends show that trust is clearly growing, slowly but steadily.  I believe this results not from any single election or policy, but from a multitude of reform efforts. But the report also sends some warning signs, highlighting areas for attention. Unsurprisingly, perhaps, the levels of trust in the judiciary are very low and, as of November 2017 at least, convey a stubborn skepticism that the judicial reform will be a success.”

For updates from the event follow the hashtag #TrustInGovernance

About the Opinion Poll “Trust in Governance” The 2017 Opinion Poll “Trust in Governance” has been conducted for five consecutive years. It explores public perceptions on trust in institutions, transparency and accountability, corruption, citizen engagement in policy and decision-making, satisfaction with public service delivery, and enforcement of non-discriminatory laws and policies. It is based on a similar methodology, survey instrument and national coverage.The fieldwork for the 2017 Survey was conducted between 17 and 30 November 2017. A total of 1647 citizens were interviewed in the 61 municipalities of Albania.

The Opinion Poll is supported by UNDP Albania, through the project: “Support for Innovation against Corruption: Building a Citizen Centric Service Delivery Model in Albania.