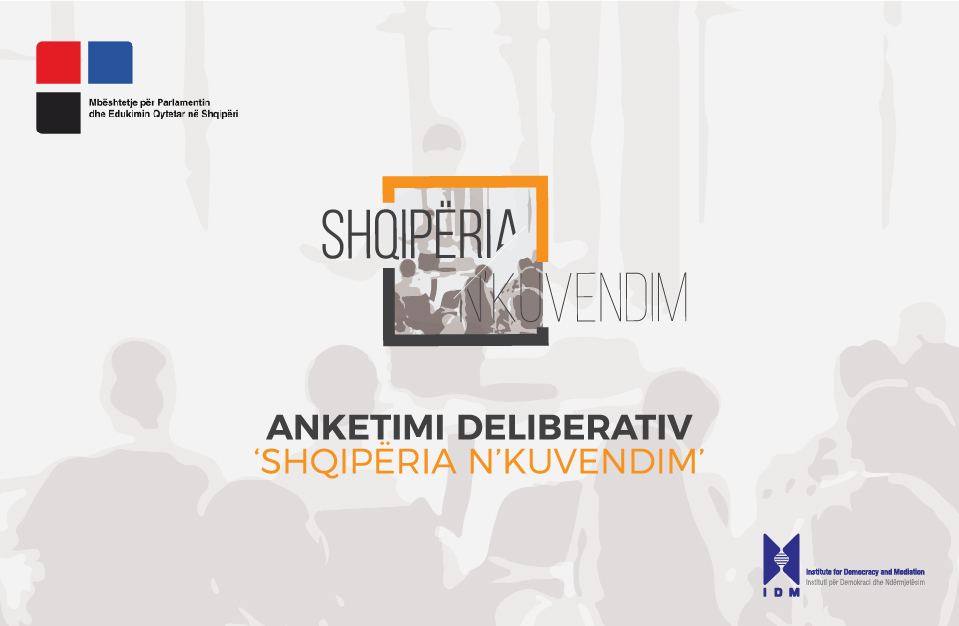 Results of the first social experiment of deliberative democracy in Albania

The deliberative polling methodology is implemented for the first time in Albania by IDM, in consultation with the Center for Deliberative Democracy at Stanford University (USA), which has carried out this method of public consultation in more than 29 countries worldwide. Deliberative polling is a unique form of political consultation that combines techniques of public opinion research and public deliberation to reveal what public opinion would be on a particular issue if citizens were given a chance to become more informed.

This social experiment is based on three surveys. A nationally representative survey of 1,200 respondents that aims to provide public perceptions and attitudes at the national level about different policy alternatives for each of the topics – citizen participation, parliamentary oversight, internal party democracy, electoral reform, diaspora vote, climate change, and economic immigration.

Main findings of the national survey

According to the national survey, almost half (48.1%) of Albanians tend to disagree with the statement “The current electoral system for the national parliament in Albania reflects the will of the people” Albanians favor those options which provide for stronger links between voters and MPs (not parties). Namely, these options are the pure majoritarian system and fully open lists under the current regional proportional electoral system. The majority of citizens (71.5%) show significant support for the right of the Albanian diaspora to vote. In terms of voting methods, citizens are more inclined toward electronic voting (61.9%) as they consider it more reliable and provide easier access to citizens living abroad, regardless of whether there is a diplomatic mission in the country where they reside. Participants in ” Shqiperia n’Kuvendim” argued that by guaranteeing the right to vote, citizens living abroad will be more integrated into the public and political life in Albania.

Albanians tend to be more supportive of the proposal which relies on the role of independent oversight institutions, than the measures which center around the parliamentary opposition. This suggests a shift towards a greater role for the independent institutions to strengthen oversight of the government. Also, the introduction of competitive mechanisms in the internal election system of political parties is perceived as a very important process by almost three to four respondents of the national survey.

Although participants in this exercise self-declare reluctant to change different aspects of their political beliefs, comparative data between the treatment group survey (which was exposed to additional information) and the control group suggest that “changing perspectives” is possible if consultations take place by actively informing the subjects (citizens).

Objective information and the opportunity to discuss topics shape people’s attitudes and the quality of the public debate. Out of a total of twenty proposed policy measures, in more than half of them (eleven), significant differences were identified between the treatment group (who were able to discuss and receive further information from experts and briefings) and the control group participants. The topics and proposals on which the participants of the treatment group changed their attitude compared to the control group are related to topics such as the internal democracy of political parties, the mechanisms of direct democracy, and parliamentary oversight. Issues related to climate change, diaspora vote, or economic immigration did not show such differences among the participants in the experiment. In cases where there were differences between the groups, the information provided to the treatment group in most cases reinforced the supportive tendency. Only in two cases did the “informed deliberation” encourage the treatment group to be less in favor (than the control group) of certain measures (“auditing party finances by international companies” and “increasing public funding for parties”).

The benefits from informed consultation processes are invaluable and a powerful tool for developing critical thinking in society.