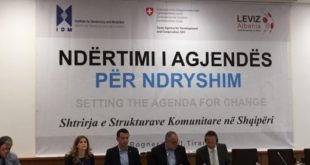 Conference: Scaling up community structures in Albania: Setting the agenda for change

May 16th 2017– The new Law on Local Self-Governance (approved in 2015) introduced a shift in how communities and their roles in urban development are viewed. Specifically, Article 68 and 69 of the Law on Local Self-Governance specify that community structures – community councils and liaisons – will be established in urban areas. Community structures will not be elected by government officials; neither will they be used to advance political agendas. Quite the contrary, they will emerge from the grassroots. Each neighborhood will transform into a civic space where members interact, organize, and advance collective goals.

The conference Scaling up community structures in Albania: Setting the agenda for change organized by the Institute for Democracy and Mediation, with the support of the Embassy of Switzerland in Albania and LevizAlbania programme, brought together local officials from various municipalities in the country, donors’ and CSOs representatives, and other interested stakeholders to share the work done in the frame of “Tirana SPEAKS/Albania SPEAKS” initiative, over a one year period, as well as to provide an overview of challenges in the implementation of community organization according to the new Law on Local Self-Governance. A Policy Brief aims at shedding light on the potentials and challenges of the implementation of this initiative in the local communities was shared with all the invitees.

In his opening speech at the conference, Mr. Sotiraq Hroni, IDM Executive Director, among other things he stressed that the process of implementing community structures is not a short, neither an easy process, but the only one to ensure a two-way governance, from top to bottom and bottom up. Further, Further, Mr. Hroni underlined: “There may be many challenges, but if I would mention one is local leadership, in particular the vision, the desire and the model on which the Mayor relies to govern.”

Swiss Ambassador Mr. Christoph Graf declared that the time of forced extreme collectivism or wild individualism has gone and that Albanian citizens have to act by taking responsibility s at the local level and working together. “It is time to have an optimal match between what is public and what is private. I strongly believe that a good democratic society starts at the local level, in our cities, in our villages and in our neighborhoods, said Ambassador Graf.

The Mayor of Tirana Municipality, Mr. Erion Veliaj in his speech presented an overview of  the many problems faced by the community life in Tirana and the need for citizen organization. In this regard, Mr. Veliaj shared with the participants the latest initiatives undertaken by the Municipality of Tirana to address some of these challenges such as the one on the co-ownership and community living through the appointment of local administrators.

Mrs. Valbona Kuko, Executive Director of LevizAlbania, highly appreciated the citizens’ role in local decision-making, especially in regard to local democracy vis-à-vis territorial administrative reform. She also added that: “The Municipality of Berat has integrated IDM’s suggestions on the regulatory framework of the functioning of community structures, and in this case, I take the opportunity to invite and appeal to other Municipalities to follow the example of Berat Municipality.”

The discussions at the Conference highlighted a series of challenges and obstacles that have to be addressed in order to create an enabling environment for the implementation of community structures from the grassroots.