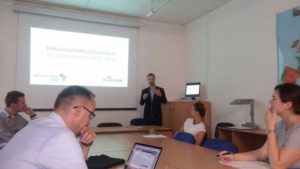 On June 26-30, IDM representative, Besjana Kuci and Ministry of Innovation and Public Administration MIAP civil servant, together with representatives of each of the TEN member organisations and civil servants from each of the Western Balkan countries, participated in a study tour to Bratislava (Slovak Republic) and Prague (Czech Republic), as part of the project Raising capacities and advocacy potential towards more substantive involvement of CSOs of V4 and WB6. The project is implemented by TEN and supported by the Visegrad Fund.

Participants had the chance to visit both the civil society organisations and the state institutions in charge of horizontal policymaking in the Slovak Republic and Czech Republic. In Slovakia, the visit was hosted by the partner organisation Slovak Governance Institute. The government’s experience in cooperating with CSOs was presented by the representatives of Ministry of Justice, Ministry of Finance and Office of the Plenipotentiary of the Government for the Development of Civil Society. The practice of the civil sector was presented by  Slovensko.digital, Slovak Governance Institute, Pontis Foundation and Stop Corruption Foundation. The interactive discussions served for gaining insights and ideas for improving the quality of the policymaking systems both in WB6 countries and in the Slovak Republic.

In the Czech Republic, the participants were welcomed by the partner organisation EUROPEUM, who provided the introduction into the Czech context and presented their previous initiatives, projects and cooperation with the WB think tanks. The focus of the visit was placed on a very successful case of the Reconstruction of the State initiative. In addition, participants had the chance to learn about a local initiative for better urban planning.

The study tour focused on learning from the V4 partners about their legal and institutional framework for CSO involvement in policymaking, its enforcement, practical problems and obstacles for CSOs to effectively participate in policymaking. Slovak and Czech NGOs and state institutions shared their best practices, whereas a special focus was dedicated to the effects of EU membership to the quality of policymaking in Slovakia and Czech Republic and CSOs’ contribution in this respect.

The study tour represented a significant opportunity to exchange views and experiences both among the colleagues from the WB6 with the civil servants as well as among the TEN representatives. In particular, the participation of civil servants, representatives of respective policymaking institutions from the Western Balkans, was aimed to raise knowledge of these individuals on comparative policymaking systems and contribute to cooperation between the state and civil institutions.

Towards De-Centralization? An Analysis of the Enabling Environment of Decentralization in Albania