USAID Releases the 16th Edition of the CSO Sustainability Index 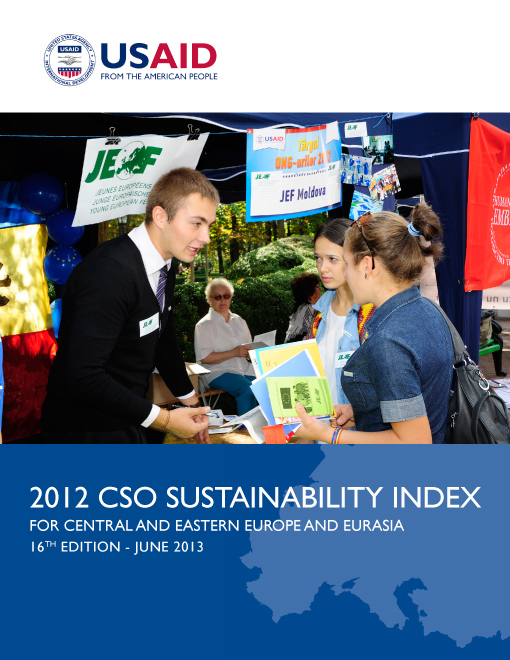 Washington, D.C. – The U.S. Agency for International Development (USAID) released the 16th edition of its Civil Society Organization Sustainability Index (CSOSI) in recognition of the broad range of nonprofit civil society organizations (CSO) active in the region.  This year’s edition covers civil society developments during calendar year 2012.  The Index has tracked the progress of the CSO sector in twenty-nine countries over the past sixteen years.  It examines the overall enabling environment for civil society, focusing on the legal environment, organizational capacity, financial viability, advocacy, service provision, infrastructure, and public image.

Despite a growing number of new restrictions imposed on civil society during the past year, CSOs in Central and Eastern Europe and Eurasia showed some positive movement towards sustainability in 2012.  Across the region, CSOs are forging into more arenas and engaging citizens and governments in new ways, such as a push towards new advocacy agendas and acceleration in online communication.  However, several ongoing challenges persist, including the use of legal restrictions to constrain civil society, continued financial hardship, lagging transparency measures, and strong regional disparities, which threatens to halt, or even reverse, continued positive CSO sector development. Notably, twenty years into the transition, only seven countries’ overall sustainability scores fall within the highest level of sustainability—Sustainability Enhanced.

The fact that civil society in so many countries still struggles to secure its future reflects the reality that building CSO sector sustainability is a long-term process.  Despite the challenges, the practice of citizens working together to solve their own problems is becoming ingrained in all countries in the region to the extent that they are now permanent fixtures in society. Whether fighting for the rights of children with dyslexia in Latvia, pushing for a referendum on the import of non-hazardous waste in Albania, or promoting HIV/AIDS prevention and testing in Uzbekistan, CSOs across Central and Eastern Europe and Eurasia are actively responding to the challenges their countries face.

The CSOSI has been transformed dramatically since its inception – it has expanded from covering 21 countries in the Europe and Eurasia Region, to covering over 60 countries in different regions around the world. Institute for Democracy and Mediation is pleased to partner with USAID to produce the CSOSI for Albania.

The full report can be found at: http://www.usaid.gov/europe-eurasia-civil-society