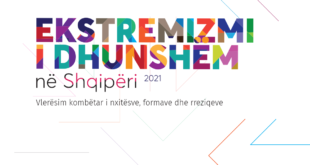 The status of violent extremism in Albania 2021

The status of violent extremism in Albania: A national assessment of drivers, forms and threats

While over the past few years, religious violent extremism has been a primary concern in Albania, the 2018 study ‘Violent Extremism in Albania’ (IDM, 2018), noted an increased potential for other types of extremism in the country. Indeed, this study confirms that Albanians are more concerned about political extremism than with religious or nationalist extremism. Albanians are more likely to report that political extremist groups or individuals (27.3%) are operating in their community than religious (12.1%) or nationalist (7.6%) extremist groups or individuals.

The aim of this study is to inform decision makers and improve the capacities of P/CVE stakeholders by offering a body of knowledge that will help shaping prevention policies, upcoming disengagement programs, and institutional measures and stakeholders’ capacities to rehabilitate and reintegrate returnees and other potential victims of violent extremism ideologies in the future. Ultimately, this will step up efforts, the sustainability of the impact of P/CVE actions and will contribute towards a better-informed public debate and narrowed pathways for VE ideologies to garner support or expand their base of followers.

This study is prepared in the framework of the project “Countering violent extremism in Albania – Persisting violent extremist forms and threats and the way forward to reinforced PVE”, supported financially by the Public Affairs Office of the US Embassy in Tirana. Opinions, findings, conclusions and recommendations expressed are of the author/s, and do not necessarily represent those of the State Department.