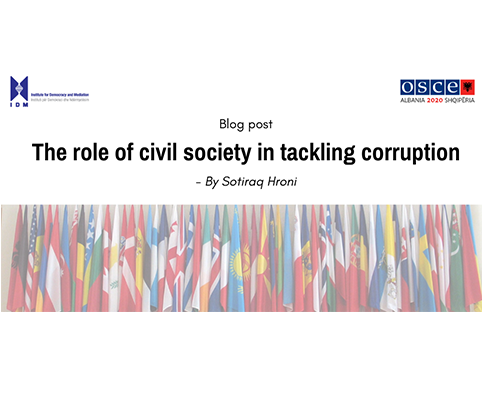 Speech by IDM’s Executive Director Sotiraq Hroni at the 2020 Albanian OSCE Chairmanship Conference “Good Governance and the Fight against Corruption in the Digital Era: Strengthening the Principles of Transparency, Integrity and Accountability”.

This speech was delivered as a part of the session “The role of whistleblowers, media and civil society in tackling corruption“.

Allow me to join the other speakers in thanking the Albanian government for the invitation to address this very important high-level conference.

As many of you will know, there is a general understanding that civil society organisations have an important role to play in the fight against corruption and its effectiveness to influence both the public authorities and the general public. Yet, civil society cannot constitute a single isolated force in the broader anti-corruption movement, or drive the reform agenda on its own. The role civil society plays is strongly affected by the environment around governance, transparency of law-making processes and the predictability of legislations’ enforcement, capacities and impartiality of public administration. Furthermore, its role can be significantly improved by the quality of interactions and synergies built with other societal players such as media, the academic community, the business sector, and the communities of citizens.

The trust that citizens have in civil society organisations’ (CSO) role in anti-corruption efforts is in this sense both an indicator of their strength in the fight against corruption and an enabler of such strength. This also holds true for the watchdog role of the media and other stakeholders. According to IDM’s latest Trust in Governance Opinion Poll for 2019, only 47% of the citizens trust CSOs, while 51% trust media. Close to these figures stands the perception of citizens that civil society and the media have an important role to play in holding the government to account.

However, coping with corruption challenges needs inputs from the whole society. And in trying to understand and shape the role of each player (state or non-state), it remains crucial to answer the question as to “who owns anti-corruption efforts”. In societies where corruption is considered endemic, the government alone cannot go far. Tackling corruption requires a societal approach, in which media, the business community, and civil society, in general, should have indispensably their own shares, like all other public entities, the parliament, law enforcement agencies, and so forth. Governments should not concentrate authority and power in fighting against corruption, but rather share it with other societal players.

Moreover, fighting corruption is not simply a technical or administrative task. It requires a broader political perspective. Parliament is a very important factor to ensure the inclusiveness of societal actors. Thus, on one hand, the parliament may be instrumental in boosting the role civil society and media can play – while on the other hand, a more visible role of the parliament means more legitimacy to the efforts, more representativeness, and consequently trust in societal efforts to fight corruption. Precisely on this role, CSOs furnish the parliament with research findings and evidence that support decision-making processes and arguments on which institutional accountability can be founded.

In Albania, building trust in the efforts to fight corruption remains a challenge, especially for the justice sector. The completion of the Justice Reform, the delivery and prosecution of grand corruption cases, and sticking to the established democratic rules for any decision-making process at the national and local level are important milestones in this effort. The trust of citizens in the country’s anti-corruption efforts is linked as well to the highly anticipated outputs of justice reform.

An area that might need more attention in the preparedness of the society to cope with growing challenges in the fight against corruption and organised crime is empowering the non-public sector. CSO, the business community, and the media should look more upon cooperation and potentially more operational partnerships with each other to develop joint positions and to undertake joint advocacy efforts for important issues of good governance.

Although their endeavour would be more consolidated if a whole-of-society approach were employed, there is no area in the fight against corruption and organised crime that civil society cannot deliver. Soon civil society actors from all western Balkans countries are to deliver a regional register of unpunished grand corruption cases as well as tailor-made laws. This project, funded by EU and implemented by Transparency International together with CSOs from all the western Balkan countries, will be an important step in demonstrating civil society’s capacity to produce evidence in this quite sensitive area.

In Albania, but I believe in the wider region as well, it is quite positive for the civil society sector to notice that more trust is being placed by different donors – especially the EU – in support of empowering the sector, investing in their capacities and assisting the creation of more synergic efforts at the national and at the local level. Often this support comes through sub granting schemes, which enhances responsibilities while at the same time creating more opportunities for civil society to grow and prove its maturity (as it has successfully done so in recent years). This is an important trend that will result in further consolidation of civil society.

This said it is evident that CSOs are still dependent on international donor support and will continue to be so for the foreseeable future. It is being noticed that donors like EU, US, and other bilateral donors are addressing needs for the development of the sector, but at the same time, due diligence is giving to the obvious need to keep the sector’s mission is driven by country’s development priorities.

A very famous African proverb says – “If you want to go fast, go alone. But if you want to go far, go together”. In the fight against corruption, it is difficult to reach at sustained results alone. So, I would suggest that institutional leadership should embody the second part of this proverb, and things seem to be moving in that direction.

The setting up of the Coordination Committee for Monitoring the National Strategy against Corruption and respective action plan is a step forward to periodic consultation meetings between the National Coordinator against Corruption and civil society. The Committee is summoned at the technical and political level and will result in becoming instrumental to an enhanced contribution of civil society and media. Nonetheless, as one of yesterday’s contributors said: “empowering actors to fight against corruption is a marathon”.

Similarly, on the initiative of the National Coordinator against Corruption, Mrs Etilda Gjonaj, the Ministry of Justice, UNDP, and IDM cooperated in producing guiding national frameworks on the methodology for risk assessment for central and local institutions. The implementation of such methodology is already translated into integrity plans for several local municipalities and for the Albanian Ministry of Justice. We look forward to deepening such experiences that will help professional and impartial public administration that delivers to the citizens.

School as community Center – Going beyond the school framework