The new accession methodology – A peace agreement between EC and Member States? 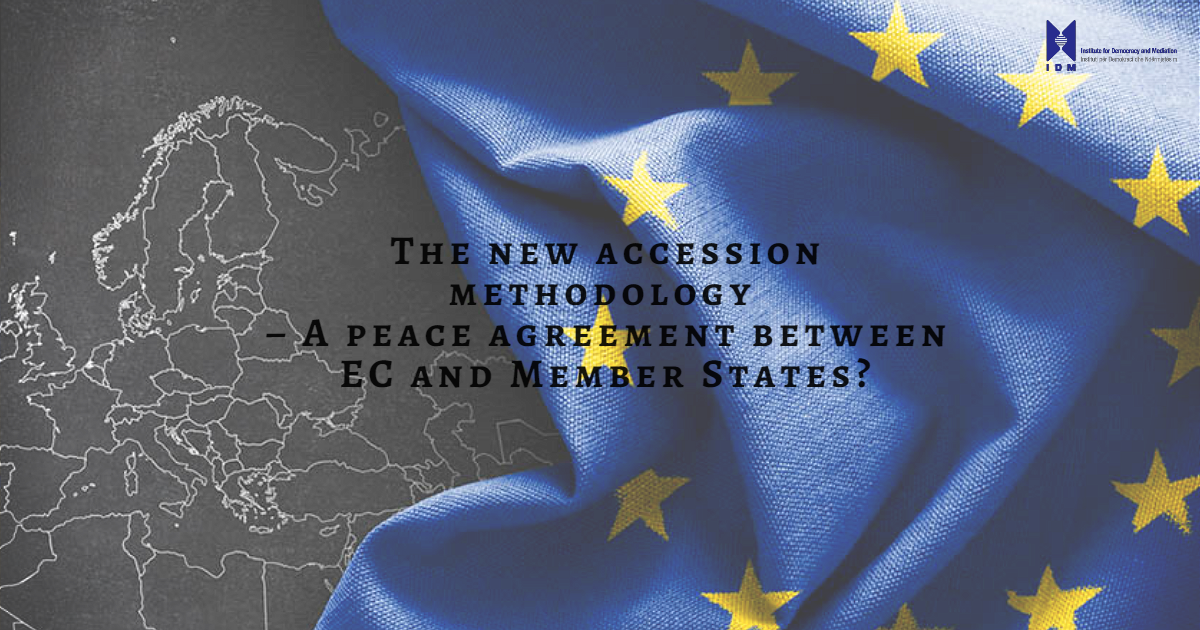 There were a time in western Balkan (WB) countries, maybe some fifteen years ago, when local politicians, media and civil society were carefully reading the European Commission’s (EC) progress reports. It was a time in which the public was eager to hear from civil society and media as per what exactly was the EU’s assessment of the country’s progress. Progress reports were considered technical rather than political documents: an expert opinion by an objective and trusted “judge”.  At that time, civil society organizations (CSOs) were pushing the EC to use unbiased language and include an assessment scale, so that we could better track the progress and explain it to the public. Eventually, the EC did so by introducing scales for progress and subsequently for the level of preparedness for each chapter.

Faced with the prospect of more direct language that would expose their resistance to progress and even autocratic tendency, WB leaders started channeling other sources within the European Union (EU) to question the credibility of EC reports. First in line was the group of sister parties in the European Parliament. Depending on the political affiliation of the WB government, WB leaders would ensure the citizens hear Members of the European Parliament (MEP) commenting on positive aspects of the EC report. However, as the opposition parties started doing the same with MEPs from their political spectrum, this channel was soon exposed in the eyes of WB public. The next in line were Member States’ officials and the narrative that “the EU is complex (…) Member States have different interests (…) and that it is not us, but the EU that is failing”. It has not been difficult to find senior officials in the Member States articulating the narrative of a faulty EU over the past decade. Indeed, the EU is complex and has diverging interests at times, which has made it easier to sell a half-true narrative to the public as a fully true one.

As WB leaders succeeded to undermine the trustworthiness of EC reports in the eyes of the domestic public, they also cast doubt among the Member States. And truth be told – who can blame them? When the EC claimed good progress in Albania for the fight against corruption, the country was sinking at TI’s Corruption perceptions index with a record drop of 23 places between 2016 and 2019. Similarly, while Vučić was attacking the free press and closing media in Serbia the then Enlargement Commissioner Hahn was seeking proof of media censorship. These developments challenged the objectivity of the Commission specifically and the EU more generally and caused EC reports to be seen as biased and political by many audiences in the WBs and the Member States. Consequently, the EU’s credibility is standing on shaky ground, both at home and in the WB region.

The new accession methodology is a good, but insufficient attempt towards restoring EU’s credibility in the WB region. The document resembles more a “peace agreement” between EC and EU Member States, rather than a roadmap for a credible and accelerated accession for WB countries. Although its purpose is to reinvigorate the accession process and build a credible EU perspective for the WBs, much of its content is about reassuring the voice of Member States in the enlargement process. It is less about the role of WB citizens and civil society in the accession process. A simple word-count in the document underscores this conclusion. While explaining the new methodology, the 8-page document mentions[1] :

A peace agreement between EC and the Member States is not a bad thing per se. WB citizens are in dire need of a credible EU to speak with one voice on issues that matter to them. We haven’t seen much of this recently, which has led to great disillusionment and lack of hope.

The mutual trust between EC and the Member States is a good development, for as long as it aims to restore the EU’s credibility and reinvigorates the Commission’s annual reports as an objective expert evaluation of WBs progress – free of political games. In doing so, the EU should not trade stability for democracy. EU and EC reports should be equally vocal and straightforward, not only when Member States’ interests are threatened (illegal migration, organized crime, terrorism, etc.) but also when WB citizens’ priorities are at stake (corruption, state capture, decline of democracy, shrinking civic space, and deteriorated freedom of expression).

To deliver on this expectation, the new methodology must carefully read the causes and the symptoms of stagnation in the WBs. Most importantly, it should not ignore the most reliable partner and ally of the EU in the region: citizens, civil society and independent media.

Needless to say, the EU has to work with governments and political actors in the WB, but it should align with the ambition of citizens. It should not shy away from their voice just to please fake reformers in the government or opposition. It should strengthen the people’s role, and the voice of independent media and civil society to keep governments accountable.

Unfortunately, the document largely ignores the WB civil society and the role we should play in the accession and democratization reforms. We are mentioned only once in the methodology with the purpose of being assured that EU funds will continue supporting our work, even when the EU decides to punish WB governments for lack of progress.

The truth is that we have done so without funding, even when the EU failed to back us up with political statements. The community of artists in Tirana has been protesting every single day, for over two years, against a highly controversial PPP-project to replace a treasured theatre with private towers. This project was even backed up with specially created laws to legitimize the scheme. At the same time, Albania’s students took the streets for 2 weeks straight without spending a cent of the EU’s money. Similarly, Albanians, Montenegrins, and Serbs took the streets for days rallying against corruption and media censorship without any funding.

The new methodology for EU enlargement fails to capitalize on a huge potential for change in the WBs. This change requires a credible EU speaking openly with one voice against state capture, corruption, shrinking freedom of expression and civic space, threatened independent media and democratic values. More than funding, WB civil society needs to be reassured about its role under the new accession methodology.

There is still time to improve the document and make the new approach more effective and reliable. It will increase chances for real change and the impact of the novelties introduced in the methodology. There are many positive elements in the new methodology such as:

Other positive aspects of the document have triggered interests by Member States and WB leaders. However, the main challenge ahead is to make the new methodology more credible and attractive to WB citizens and their civil society.

This will require something less expensive than EU funds, but far more impactful. It will require partnering with the ambition of WB citizens, entrusting them a role in the accession process, and empowering civil society, media, and other agents of change against captured political class in our countries. That is the only sustained way to help ourselves at home and to help address the EU’s own concerns such as illegal migration, security, and organized crime.

[1] # of mentions excluding the title of the document(s).

The Integrity Plan: A new perspective in the fight against corruption | October 2020