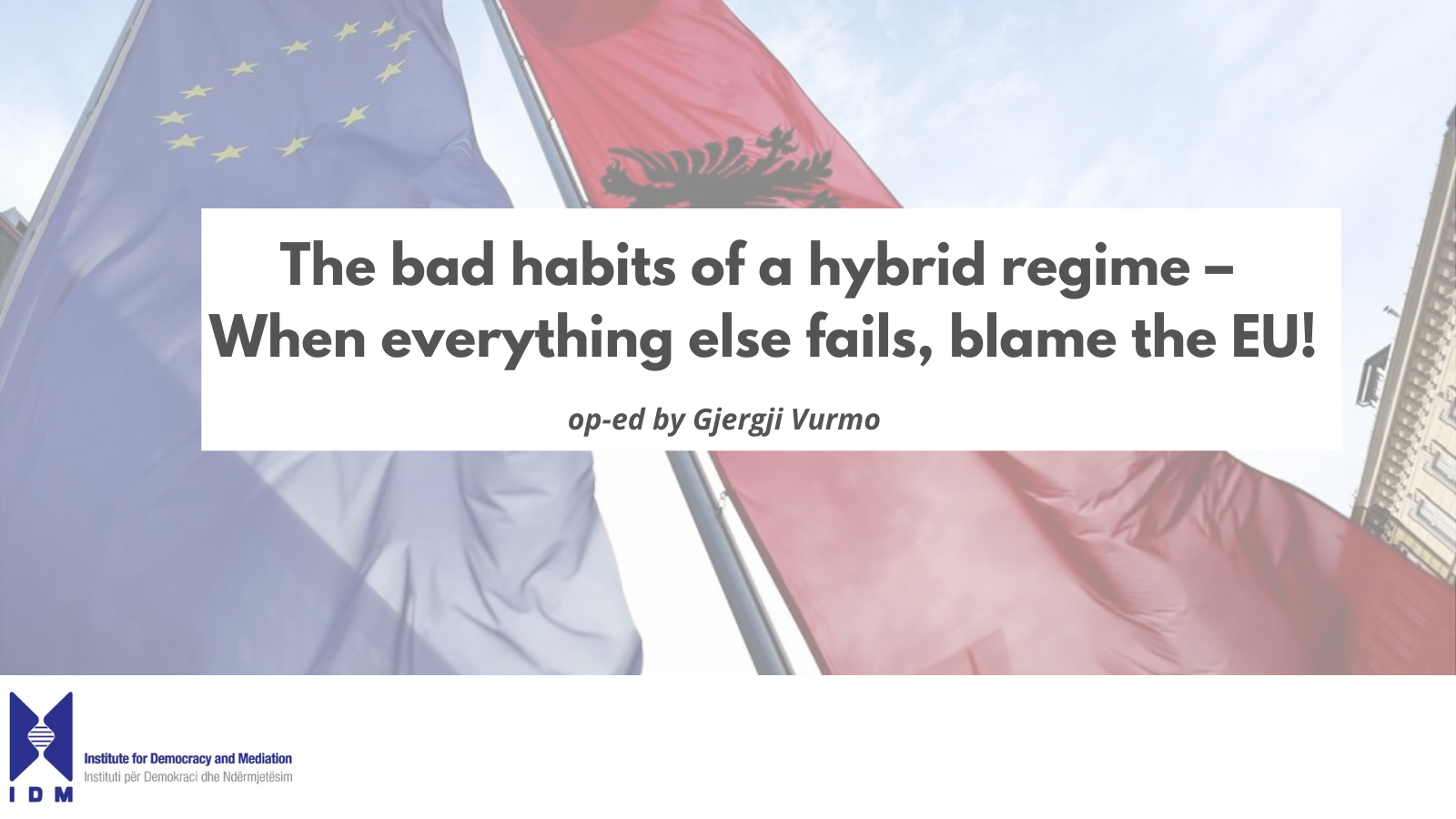 The bad habits of a hybrid regime – When everything else fails, blame the EU! | December 2020

*This Op-Ed that was originally published in www.europeanwesternbalkans.com on 10 December 2020.

The EU summit will likely skip the topic of enlargement in the German Presidency’s Conclusions later this week. As North Macedonia missed another year for opening membership negotiations due to Bulgaria’s veto, Albania managed to block its own accession by failing to fulfill the set conditions before the first intergovernmental conference. Expectedly, officials of the ruling Socialists tried to blame their own failure to the Bulgarian veto on North Macedonia’s EU bid while PM Edi Rama suggested earlier that the Dutch elections scheduled for next year should be blamed.

Of course, none of this is true. If the Dutch elections were to be a factor, as ruling Albanian socialists claim, the Netherlands would have objected to North Macedonia’s EU bid as well. That, of course, did not happen, as the Dutch parliament advised Minister Blok not to do so. Indeed, enlargement fatigue and skepticism towards the EU and new potential members is a reality in many EU Member States. However, in the case of Albania, Member States did not even have to bother opposing on grounds of their fatigue or scepticism this year: Albania is doing much better job in that than any of them would do.

The March 2020 Council conclusions suggested that prior to holding the first intergovernmental conference, Albania should (1) adopt the electoral reform, (2) progress with the judicial reform including the functioning of Constitutional and High Courts and finalize the establishment of anticorruption bodies, (3) strengthen the fight against corruption and organized crime, (4) tackle the phenomenon of unfolded asylum applications, and (5) amend the media law as per the Venice Commission’s advice.

The European Commission 2020 report painted a rosy picture suggesting Albania was close to fulfilling conditions for the first intergovernmental conference. Obviously, some EU Member States were not as enthusiastic and argued that there are “two unresolved issues – the Constitutional Court and implementation of the new electoral law”. There is however a third unresolved issue: the media law, which the ruling Socialists have thus far not amended according to the Venice Commission’s recommendations.

The EC report 2020 recognises that both the conditions on the Constitutional Court and those on the media law have not been met. Unlike the assessment of some EU Member States though, the EC claims that the electoral reform condition is fulfilled. Consequently, the EU cannot decide contrary to the European Council conclusions for the opening of accession talks which requires the fulfillment of all five conditions.

This outcome was expected months ago, when it became clear that the Albanian government would push forward its plans to change the Constitution and Electoral Code without the oppositions’ consensus. Another signal was the government’s game of words around Venice Commission’s recommendations about the infamous media defamation package.

Not only was the outcome clear, but apparently it was also evidently wanted by the Government. Not that Albania’s Socialist government would necessarily mind the opening of EU negotiations. I believe they would welcome a trophy. However, they only want this trophy under the condition that it does not threaten the hybrid regime and its continuation. For a favourable result in the 2021 parliamentary elections though, the Government does not need (1) free media or (2) consensual rules of the electoral “game”. Considering the fact that both are a condition for the opening of accession talks, the Government decided to fail the country on both of them.

It is not only the progress of the country’s EU accession process that pays the price, but also the very idea of Europe. To justify its own failures and the raison d’etre (in power), the government fuels Euroscepticism among Albanians by blaming the internal politics of EU Member States and their allegedly anti-Albanian press, thus following pretty much the example of other populist leaders such as former Macedonian PM N. Gruevski, Hungary’s V. Orban, Turkey’s President Erdogan and other autocrats.

On the other hand, the opposition composed of the Democratic Party (DP) and the Socialist Movement for Integration (SMI), didn’t seem to mind the Government’s failures. Rather, with only a few months left before the next general elections scheduled in April 2021, the DP and SMI would not necessarily be happy with a go-ahead for starting accession negotiations. Even less so with a government and the ruling majority that they claim is in power thanks to the cooperation with organised crime.

The Albanian opposition has not always played a constructive role when it comes to the country’s EU bid. Their resignation en bloc from the Parliament and the subsequent boycott of the 2019 local elections have harmed what was left of democracy in Albania, effectively allowing illegitimate interests to benefit from a weak state, powerful leaders, and corrupt legislative processes. This leaves Albanian citizens without much choice in front of an increasingly undemocratic government, an opposition that still does not inspire change, and with rules of the game that do not favour new political options or the promise of undoing the meticulous process of weakening Albanian democracy.

Albania’s EU bid depends on our commitment to democracy. We, the people of Albania have no other option but to rely on the power of our own courage rather than hoping for democracy to be “uploaded” in Albania by internationals, or even worse, hoping that the next government will be more citizen-driven. Democracy is not something that happens once in four years during an election: we need to build inspiring examples of protecting and safeguarding democracy every day. The two-year battle for the National Theatre was one such example; the students’ protests was another one. Both of them succeeded to articulate a much greater message than their initial cause – democracy works only if we work at it.

More examples are needed until we succeed to hold political actors accountable and consolidate a culture of democracy and rule of law at a societal level. Without these preconditions, any development process including EU accession reforms will remind us of the Myth of Sisyphus; we would push the rock up the mountain, but it would simply be a matter of time when the rock would roll down again.