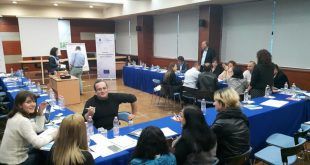 Strengthening CSOs’ capacities and impact in good governance and fight against corruption at local level | January 29, 2016

The launching event gathered representatives of civil society organizations working at national and local level, state institutions and other stakeholders (media, academia). Mr. Sotiraq Hroni, the Executive Director of the Institute for Democracy and Mediation (IDM) welcomed the opening of the Information Session. He emphasized during his welcome note the importance of these projects in fight against corruption and the role and contributes of different actors involved in this process, especially at the local level. Mr. Yngve Engstroem the Head of Cooperation, Delegation of the European Union to Albania said that: “The phenomenon of corruption damages the development of the country and the prospect of a good life for the citizens.” He noted that there are many forms of corruption and emphasized that social engagement and reaction against it at all levels has a crucial importance: “This process can’t function unless there is interest and pressure from the citizens.”

Mr. Gentian Elezi, Deputy Minister of European Integration, emphasized in his speech the role of the government in fight against corruption in Albania and expressed the interest in being informed further as regard to the respective project. Mrs. Erisa Proko, Adviser of the Minister of State for Local Issues paid attention at the role that local municipalities would play during the implementation of this project and the transparency of the process provided as an obligation by the Law, including the citizens’ initiative. She considered as very important the process of reforms initiated by government, which will include the active participation of CSO-s performing in Albania. In this Information Event was present the Executive Director of the Agency for the Support of Civil Society (ASCS) Mr. Andi Kananaj, who emphasized the importance of the financing by European Union Delegation in Albania of these two projects, aiming to increase the capacity of civil society to promote good governance and fight against corruption at the local government levels. Dalina Jashari and Myftar Doçi, presented respectively the EU funded projects: CIVILISC (Civil society Instruments against Corruption) and PACT (Partnership against Corruption). These presentations were followed by discussion and questions among participants.