School as community Center – Going beyond the school framework 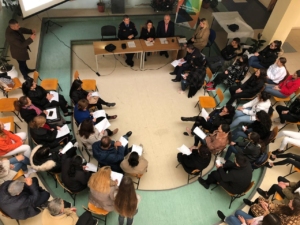 Tirana, 19 December 2019 – After months of preparation, the first action plans for the Schools of Community Centers in Durres, Vora, Peqin were approved, marking the start of the implementation of the project “Building community resilience against violent extremism through the ‘School as Community Center’ – model”. This project, supported by the U.S. Embassy’s Public Affairs Office, aims to empower local communities in Fushe Kruje, Kruje, Vore, Kashar area (Tirana), Shijak, Durres, Peqin municipalities for strengthening resilience and preventing any form of radicalization leading to violent extremism through multi-sectorial prevention measures, giving particular emphasis to the educational institutions and lifelong learning competencies.

IDMs’ extensive field work and experience in examining radicalization and VE at national and local level in Albania, suggests that the P/CVE programs should focus on enforcing capacities of local communities and establishing strong citizenship values. In this way using “School as Community Centre”- (SCC) model as an instrument that makes the school an integral part of society, enhances possibilities of local actors for joint decision-making and community development, respect for diversity, and the use of community resources in boosting community resilience.

Over the past two years, IDM has successfully piloted the SCC approach in two small remote municipalities – Cerrik and Peqin. This project contributed to transform two high schools of the targeted municipalities into community centres, thus creating a space that served to the community and to the local state actors to grow into important partners at undertaking joint actions and shared responsibilities to prevent any form of violent extremism.

The new target areas are considered as remote municipalities and with high vulnerability to any form of VE, exposed to several challenges as regards the community development, local institutional preparedness and the ability of both these actors to interact and to respond to negative phenomena. Specifically, local state institutions, law enforcement agencies and the school’s community – despite their readiness, show vague understanding about the tools to boost the community resilience and to address the driving factors of VE.

In a period of 15 months, we are going to build a strategic multi-stakeholder partnership at local level; develop capacities and support to schools’ and communities’ groups; and support networking and experience sharing of resilient communities in seven high schools:

During the first meeting with the stakeholders to discuss the action plans in Peqin on 11th of December 2019 after the presentation of the results from the survey, school representatives expressed the necessity of the community itself to have more social activities for Peqin community as an area that has not received much attention from the NGOs and other national actors. The town itself has a few entertaining opportunities and the students do not have many socializing spaces. To make the engagement of everyone more official a memorandum of understanding was signed among school/mayor/local police and educational office, to implement the activities described in the action plan. This method is going to be followed on in the other municipalities also.

In Durres we held the meeting on the 18th of December in the premises of Dom Nikoll Kacorri as a meeting point to bring all the local stakeholders together to contribute regarding the proposed activities. Community policing officers valued the meeting as a starting point to exchange information and contacts between the school community and them. Students expressed their curiosity related to the activities and how this activities are going to prevent violent extremism. One activity that was suggested to be added to the plan was sport activities for all the community, as it was mentioned by the physical training teacher the community around the school can be invited to play sports as a way to take the attention out of the negative phenomena.

On the 19th of December the project team held the last meeting for this year in Vora municipality.

The impact that the earthquake has left was very noticeable. Everyone expressed the desire to change the energy of the situation into positivity and healthier conversations such as focusing on the future and planning activities all together as a community. The parents’ community of the school was very active and engaged in the activities of the school already, which can be a model to be transmitted to the other schools of the project.

Noticing how all the local actors would take ownership of the activities and set responsibilities to each other shows the level of commitment that all the local actors have for the achievement of the project. Provision of the multi-functional classroom in each area is going to create the space were all the actors can meet and discuss the planned activities.

Share
Previous The defamation package violates human rights and the constitution | December 2019
Next Lorena Totoni
Powered by IDM Albania | Designed by Syntech
© Copyright 2021, All Rights Reserved
This site uses cookies. By continuing to browse the site, you are agreeing to our use of cookies. Privacy & Cookie.