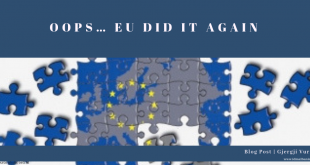 Oops… EU did it again

Civil society activists and the general public in the western Balkans (WB) have voiced their discontent regarding the rise of authoritarianism and state capture in the recent years. However, the European Union (EU), which plays an important role in the region, has been silent regarding this concern. It was only less than a year ago, when the EU finally – although almost inaudibly – spoke up about “signs of state capture” in its 2018 Enlargement Strategy. Around the same time, when representatives of Brussels institutions and EU member states toured the WB region, they assured local civil society and citizens that rule of law is a top priority for EU in the region and setbacks would not be tolerated.

This assurance encouraged citizens of WB countries to raise their voice against authoritarian leaders and the decline of democracy. Ironically, the moment that citizens of the WBs muster courage to take the streets against corrupt political leaders, against crime dictating laws and captured institutions, the EU gallops back towards its “don’t know, don’t care” shell. It seems hard for the European Union to resist the comfort of prioritizing stability over democracy for its close neighbours in south-eastern Europe.

In the past few months, massive citizen-led protests against corrupt politicians, impunity and authoritarianism took place in Serbia, Albania and Montenegro. The motivation of these protests is not what the EU observes as “signs of captured states”. Rather, it is the despair that reigns in the lives of citizens seeking a better future in their own country. Ruling political elites in all three countries have tried to minimize the significance of these protests while EU has avoided them in official statements.

The EU has not spoken up about anti-government protests in Serbia that are now going into their thirteenth week. At this moment, silence is good for EU and its expectations from President Aleksandar Vucic on the prospects of Kosovo-Serbia dialogue for the normalisation of relations between Belgrade and Pristina.

Similarly, in a recent visit to Montenegro, Commissioner Hahn did not comment about the crowd marching in Podgorica and chanting “Milo thief”. Instead he focused on the parliamentary boycott which is not the European way of dealing with disagreements.

For EU, political stability seems more important than citizens’ protests in Albania too. Brussels fears that instability would help powerful groups – corrupt politicians, oligarchs, captured media, criminal networks and the people connected with them inside the judicial system –in obstructing judicial reform, the vetting of judges and prosecutors and efforts to put an end to impunity in Albania.

Albania and EU – Is it really so complicated?

Judicial reform in Albania enjoys great public support from citizens. It also faces severe resistance from powerful groups linked with corrupt politicians. However, I’m not sure that ignoring citizens’ protests is good for the prospects of democracy in Albania. Especially when the reason for ignoring them is due to the fear that they might be used by powerful groups to obstruct judicial reform.

Over the past year, the citizens of Albania are voicing their discontent with corruption scandals and policies that serve obscure interests. If I was to give Albania’s 2018 a name, it would undoubtedly be “Citizens Protest”. 2018 started with protests against government’s deal with a private company to tear down the building of the national theatre for building a new one. The deal, called public private partnership (PPP), allows the private company to yield unreasonably high profits on public land. Albania’s year continued with Kukes citizens’ violent protest and several more peaceful ones throughout the year – only to culminate with two weeks of students’ protests in December 2018. To save face, PM Edi Rama said that he deeply felt the students’ message and quickly changed half of his cabinet. Yet, the real change Albanians are pushing for needs more than few names in the cabinet.

2018 was the year of citizens’ protests because in the case of almost all of them, politicization of the cause was rejected by the protesters. However, widespread anger against impunity and corruption scandals remains present. Clearly, the political opposition was expected to use the public disillusionment, despite the irony of the fact that part of this disillusionment is addressed at the opposition itself. After all, impunity and grand corruption is not a recent phenomenon in Albania.

Following a year of heightened political climate and sporadic parliamentary boycott, the political opposition organised an anti-government protest on February 16th this year. Four days later, in an unprecedented move, the opposition MPs decided to quit their seats in, what they see as a “mafia parliament”. The opposition urges for a technical government preparing early elections to solve the political crisis. On the other hand, the government, which clearly hasn’t understood yet the gravity of governing in absence of the opposition, sees no political crisis at all. Ironically, both sides claim to speak on behalf of the majority of Albanians.

The EU did not comment on the citizens’ protests during the course of 2018. In the past two weeks, EU representatives have called Albanian political actors to solve the political crisis. Yet again, citizens’ concerns over impunity, policies and laws that serve to oligarchs are ignored in their statements. A joint Mogherini – Hahn letter reads that “the decision by the opposition to relinquish their mandates seriously hinders the functioning of democracy in Albania… These decisions and acts are counterproductive, go against the democratic choice of Albanian citizens and undermine the progress the country has made on the European Union path”. This statement clearly shows that 1) the EU prioritizes political stability and 2) it fails to address the concerns of citizens who rocked the streets of the country over the past year.

Brussels absurdly believes that a politically stable Albania can deliver faster on judicial reform and eventually on opening of the accession talks, despite the country being a flawed democracy – a concern that is driving citizens’ protest. Sceptic EU member states have a different, but still unhelpful perspective for Albania. They acknowledge Albanian people’s concerns over impunity and declining democracy. But precisely because of such concerns, they have no intention to green light accession talks – a move which can meaningfully help the consolidation of rule of law.

Intentionally or not, all players – Brussels, enlargement-sceptic member states, the Government of Albania and the opposition – are ignoring the quest of Albanians for democracy and rule of law. Some are comfortable with half-truths hiding behind national objectives; others use the naked truth to achieve their own narrow interest. Neither seems interested in achieving Albanians’ quest.

The government claims that opposition MPs handed over their mandates because they are afraid of the judicial reform. Maybe they are. Indeed, some opposition members must fear judicial reform because of their wrongdoings when they were in power. We hope they fear judicial reform… especially those who worked with criminal networks, who ordered the killing of four protesters on January 21st 2011, the political masterminds of the huge corruption behind Gerdec explosion just to name a few.

But, let’s be honest. So should fear some members of the current political majority – the ones who enabled the cannabisation of the country, cooperated with criminal networks to buy votes in 2017, got rich through profitable PPP deals, offered protection against prosecution of their “friends”, designed laws to benefit oligarchs.

By propagating half-truths Albanian political actors are harming the quest of citizens for a free democracy, strong rule of law and institutions that are capable of putting an end to impunity and inequality. Unfortunately, by prioritising stability over democracy and by blocking the opening of accession negotiations for Albania, the EU is not contributing to democratisation either.

Brussels suggests that “the decision by the opposition to relinquish their mandates seriously hinders the functioning of democracy in Albania”. I couldn’t agree more. I’ve opposed socialists’ parliamentary boycotts in opposition (pre 2013) and I certainly cannot accept the recent move of the current opposition to abandon the parliament seats. Maybe we’re not dealing with a “mafia parliament” as the opposition claims, but it is not the cradle of integrity either. The naked truth is that the ruling majority does owe some of its MP seats to local criminal groups. Brussels should have voiced powerfully this concern in due time.

Finally, half-truths are coming also from sceptic EU member states. They seem to articulate the full facts about Albania’s challenges with corruption, democracy and impunity. However, they block opening of negotiations mostly because of their internal public debates and “enlargement fatigue”. Albania’s problems in this sense are an extra reason to not bother their constituencies with a topic which, at this moment they are not particularly fond of – enlargement.

Albanians have long perceived EU accession as a solution to their problems. It is not. Luckily, we are realising in time that EU accession will be a process that needs our own strong commitment for societal change. This is clear also for the people of Serbia and Montenegro and this is why we see today citizens in all three countries protesting against the same concerns – authoritarianism and impunity. As WB citizens muster courage to oppose to the decline of democracy, the EU must clearly articulate stronger support to this cause.

A bold strategic decision is needed

The longstanding problem of EU’s approach towards the WB region has been that the EU has usually allied with so-called “reformers”, rather than with the citizens of the region. Brussels and member states have failed to understand that transformation is not a process which can be injected top-down, but requires the change to be embraced bottom-up by the citizens. That is the only sustained strategy offering solid ground to prevent the surfacing of future “Orbans” in the enlarged EU. As the western Balkans is embarking on this understanding of the transformation process, sceptic EU member states must take the courage to explain their citizens the benefits of a united Europe and advantages of enlargement.

Stable but non-democratic neighbours should not be an option for EU and it’s certainly not an option for the western Balkan region. WB citizens do not support a fast-track accession which falls short of democracy. They want a meaningful EU accession that relies on solid foundations and societal transformation. The protests in the region show that the WB societal transformation is happening. Now is the time for the EU to join the ambition of western Balkan citizens and the long-term interests of EU citizens. Candidate status and accession negotiations have been erroneously used as a “stick and carrot” tool by EU while dealing with WB political elite who enjoy their privileges in the EU waiting room. Opening of accession negotiations as a framework that encourages societal transformation with strict conditionality and strong involvement of EU must take place as soon as possible. The EU needs to ally in this course with the citizens of the region. This will lead to a political leadership in the western Balkans that seeks reward from its own citizens instead of Brussels. That’s the kind of an EU member state that is worth struggling for.