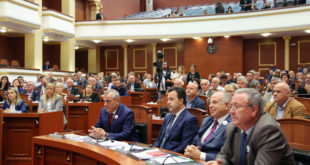 Tirana, 28-30 September 2017 – IDM is one of the founding members of the Albanian Network for Rural Development (ANRD), which in partnership with the Agricultural University of Tirana (AUT),

organized on 28-30 September 2017, on the first two days at the premises of the AUT, and on the 3rd day at the Parliament of the Republic of Albania, the First Albanian Rural Parliament. The 1st ARP was held under the Auspices of the Speaker of Albanian Parliament, Mr. Gramoz Ruçi. 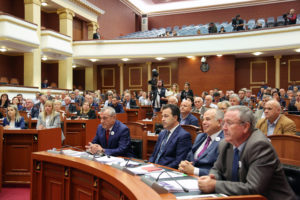 The first Albanian Rural Parliament offered a vibrant atmosphere to discuss some of the most important aspects of rural development in the country. The first two days of the 1st Alb. Rural Parliament, which took place  at the premises of the Agricultural University of Tirana,  were comprised of plenary sessions, guest speakers, discussion panels, networking opportunities, workshops and working groups, offered  a great opportunity to discuss, network, transfer know-how and exchange ideas and best practices on rural development – locally, regionally and internationally. While the third day, held at the Albanian Parliament was important to address key messages from farmers, representatives of rural communities, grass root organizations and official government representative. (See the full Programme)

Over the course of three days, 64 panelists and national and international experts interacted with over 300 guests, representatives from the 61 municipalities of the country: local public authorities, private sector, grass-root civil society organizations, ANRD member organizations, scholars and research institutions, rural entrepreneurs, and other formal and informal groups from local communities throughout the country. They attended up to 22 thematic sessions. The event was successful in putting the rural development priorities into the agenda and priorities of governmental rural policies, meantime orienting Albanian rural stakeholders toward positive and functional models in local integrated development.