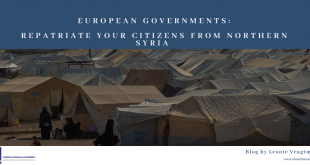 *This is an updated version of the blog that was originally published by ResPublica  on 25 October 2019.

On October 6, 2019, the White House announced that it would pull back its troops from Northern Syria in order for Turkey to launch its “long-planned” operation into Northern Syria. In the statement the US calls out its European allies for not taking back their captured ISIS fighters and declares that the US will no longer hold them at the cost of US taxpayers. Instead, Turkey will be taking the responsibility over the thousands of ISIS fighters detained in prisons and camps in the north of Syria.

The statement caused immediate panic among the population of northern Syria, whom are afraid Turkey will launch an attack on the mostly Kurdish population in the area and give way for a genocide. Indeed, Turkey’s agenda is to weaken the Kurdish autonomous region Rojava on its south border. Turkey sees Rojava’s military factions, the People’s Protection Units (YPG) and its all-female counterpart the Women’s Protection Units (YPJ), as terrorist organisations allied with the Kurdistan Workers’ Party (PKK). Less than three days after the White House announcement, the Turkish Armed Forces commenced Operation Peace Spring by launching a series of air strikes across northern Syria and preparing the Turkish army for a ground offense. In the days that followed, news reports emerged of Syrian towns and villages being shelled, of Turkish Forces targeting civilian convoys, and of a senior Kurdish politician being ambushed and killed. Videos started circulating of Turkish-backed militias going on a killing spree, murdering innocent Kurds on the street.

Across the globe, government representatives have condemned Trump’s move and Erdogan’s subsequent offence into Syrian territory. Many EU countries, including Germany, France, Norway and Finland have banned all weapon trade with NATO ally Turkey, as long as there is a chance these weapons will be used against Kurdish YPG forces. They argue that Operation Peace Spring can have dangerous consequences, including the resurgence of ISIS. In addition, the YPG, which is the largest faction in the Syrian Democratic Forces (SDF), have played a decisive role in the defeat of ISIS. As most countries that partnered in the Global Coalition Against ISIS were not willing to send troops to Iraq and Syria, the Kurds did most of the on-the ground fighting – sacrificing 11,000 of their men and women in the process. Many politicians and analysts urge that the Kurdish population in northern Syria cannot be left on its own.

Kurds to bear the burden

Despite the condemnations of Turkey’s invasion into Syria and the unanimous decision of EU countries to suspend arms exports to Turkey, the Kurds have not received any support to mitigate the situation. Merkel supposedly called Erdogan to advocate an immediate halt to his assault on the Kurds – but that request had little effect. The same day, the news broke that the SDF has reached a deal with the Russian-backed Syrian Army in which they will take over the Rojava autonomic region. This means that the Kurdish project of creating an autonomous region has officially failed. Rightfully so, the Kurds feel betrayed.

Most political commentators, analysts and even government officials point to the United States to blame. They wonder how the President could turn his back so suddenly on his most loyal allies in the Middle East. However, others also point to the Europeans. Whereas US may have pulled back too sudden, at least they had troops stationed in the region. Other Western governments chose to support the Kurds only from the air, sent weapons, humanitarian aid, or provided intelligence. Not one was willing to send its men and women to the frontlines to fight ISIS door-to-door. Moreover, after the defeat of ISIS, they left their ISIS-affiliated nationals in Iraq and Syria because they were too scared for the security risks that are coupled with bringing radicalised individuals back into their countries. Despite urgent requests by the Kurds to take back the foreign nationals due to a lack of capacities to hold the tens of thousands of detainees, no country but Kosovo has repatriated its citizens – leaving the Kurds to bear the burden.

Currently, there are about 11,000 ISIS captives and many more women and children held in northern Syria. Most of the men are detained in prisons, while women are children are held in camps such as Al-Hawl, Ayn Issa, and al Roj. Completely unprepared for the sudden influx of people earlier this year, these camps are hugely overcrowded. The largest all-female camp al-Hawl – before the Turkish offense guarded by just 400 SDF soldiers – hosts 74,000 people. Inside the camps, ISIS loyalists had set up sharia courts and volunteers enforced ISIS’ strict rules as the Hisbah did in the Caliphate. Reports emerged that women were assaulted or even murdered if they refused to comply. US officials have called the situation inside the camp as highly dangerous, as ISIS is “using the camp as an incubator for the next generation of extremists”.

Waiting for a chance to escape and resurge, the Turkish move into Northern Syria has provided an ample opportunity for the ISIS detainees. ISIS supporters have called on each other to prepare their bags as soon as Operation Peace Spring started. They knew that in order for the Kurds to defend themselves against NATO’s second-largest army, SDF fighters would have to move away from the camps to the frontlines. Camps and prisons were hugely understaffed, creating a crisis situation. On top of that, the Turks hit a Kurdish prison holding ISIS fighters, allowing several of them to escape. A few days later, intense fighting near Ayn Issa camp allowed around 800 women and children to escape from the foreigners section of the camp, of which a number has been recaptured. Following these prison outbreaks and the continued offences on Kurdish-led territory, the SDF warned that it is unsure whether it can hold the ISIS affiliates much longer.

Take citizens back now we still can

Western countries that have nationals in the detention camps in Northern Syria are on the highest alert. If their nationals and other ISIS-sympathisers escape, it would be a start of an enormous security crisis. Not only do these countries then risk that ISIS-sympathising nationals find their way home, but worse is the fear that they remain under the radar and that their whereabouts will be unknown. The UK for example, has already lost sight of some of its orphaned children that resided in Ayn Issa detention camp. Therefore it is now considering repatriating its ISIS-affiliated nationals, particularly “where women and children are involved”.

Another fear is that once Assad takes custody of the Kurdish prisons and camps, that he will then be able to use the detainees as a bargaining chip against the West. Eight years after the start of the Syrian civil war, the dictator that does not fear to use chemical weapons against his own people, will then have in his hands a powerful geopolitical weapon that he can use to his own advantage. Ten of thousands of ISIS affiliates, most of them not convicted, can be leveraged to re-establish his iron fist in Syria and secure his position in the region. To prevent this from happening, all Western countries should begin by repatriating their nationals as soon as possible and consider possible solutions for the thousands of fighters from the MENA region. EU countries, but also the countries of the Western Balkan have thousands of ISIS fighters, women and minors residing in the area. International organisations and foreign governments have already offered support for those non-EU countries willing to repatriate their citizens. In April this year, Kosovo was able to repatriate 110 of its citizens with the support of the US. In addition, the rest of the thousands of ISIS fighters that reside in the camps should be relocated to a more secure and neutral location. Only then we can prevent Assad’s bargaining chip from becoming reality.