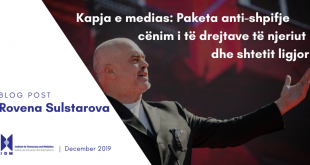 The defamation package violates human rights and the constitution | December 2019

“We have the natural right to use our pens
and tongues at our own risk and sacrifice.”
‘Freedom of press’ in the Philosophical Dictionary (1764)

The proposed package of amendments to the media legislation has been met with concern by critics that accuse the Rama Government of restricting the freedom of expression in Albania. The planned changes include additions and amendments to “On Audiovisual Media in the Republic of Albania” Law No. 97/2013 and “On Electronic Communications in the Republic of Albania” Law No. 9918, dated 19.5.2008, with the rationale that these changes will help organize virtual media and fight fake news. However, control of virtual media through this package constitutes a threat to the guarantee of freedom of expression and transparency. By vesting judicial powers to two national media operators, Audiovisual Media Authority (AMA) and Electronic and Postal Communications Authority (AKEP), the amendments violate the principle of separation of powers and are in complete contradiction with the legal provisions in place. Most importantly, they do comply with the international standards and conventions ratified by the Republic of Albania to guarantee freedom of expression and freedom of the press.

Below are some of the main objections to the so-called “Anti-Defamation Package”, addressing the threat posed to human rights, the rule of law, and freedom of expression:

Guaranteeing freedom of expression is one of the fundamental rights of democratic countries and a starting point for the development of a free and democratic society. Freedom of expression is a right that enjoys special constitutional protection and is, at the same time, recognized as a fundamental European right by the European Court of Human Rights.

Therefore, if these draft laws are passed by the Parliament, the next logical step for the stakeholders would be to challenge them with the President of the Republic, the Constitutional Court and, subsequently, with the European Court of Human Rights. Consequently, despite the process being protracted due to the fact that the Constitutional Court is currently dysfunctional, these laws will definitely be repealed. In the meantime, the constraint on the freedom of expression in the media will be real, as it did in very rare cases during the post-communist transition years. Perhaps, its biggest effects will be an increasing amount of government propaganda and media self-censorship, as a result of which criticism on the Rama government’s failures will be less voiced in the public domain and in lower tone than ever before.

How far have Security Sector Reforms (SSR) in the Western Balkans progressed?