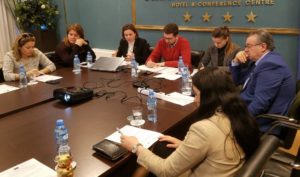 Tirana, 27 December 2018 – Although the implementation of the police vetting process that has not yet started, it will affect the human resources of the police personnel. In the last sessions of the consultation forums, IDM Researcher Rovena Sulstarova listed some of the recommendations of establishing clear and transparent procedures for career advancement of police officers based on the principle of meritocracy and providing ongoing training on ethics and police integrity prescribed in the annual training plan. Currently, the police force is about 10463 police personnel with more than half constituting the lower ranks and the process of career advancement is very slow and difficult.

In this regard, the representative of the police union association raised several important issues for the MoI and police leadership to be taken into consideration. Firstly, the working conditions and wages are not commensurate to the actual police work, nor is it comparable with the Balkan region. Also, the median age of the police force has increased to 44,5 years old and this will lead to future problems of the police personnel. Currently, the only way to renew the police force is planning by the number of officers that retire.

Another important aspect stated by the participants was the culture of impunity for police misconduct, especially for the managerial ranks within the state police.
Moreover, the representative of the Security Academy, claimed that integrity leads to a greater sense of security and more public trust. The research work of civil society is valuable contribution in terms of complementing the police institutions research. The Security Academy, with the support of the donors, tries to update its curriculum and provide tailored training to the police officers.

Consultations on Financial Management in the State Police

The final consultation session focused on issues of better financial management. As, Redion Qirjazi, IDM researcher, pointed out that the budget of the State Police constitutes about 80% of the MoI total budget. Following the audit law amendments in 2016, the audit of the police budget is conducted by its own audit structure independent form the MoI audit.
As main issues to be addressed were highlighted increased transparency of the State Police budget program execution and the reduction of the implementation of the direct procurement procedures in order to avoid mismanagement of public funds as well as address the recommendations of the State Audit Institution.

In this context, a civil society representative argues that in recent year the state police budget has increased significantly, but the parliamentary hearings in times of budget approval are very scarce and the follow up of budget execution is lacking.

Furthermore, a MoI audit representative, emphasized the need to improve state police audit capacities for Performance Auditing and specialized audits such as ICT etc. Another concern was raised with regard to the lower degree of discretion on the side of MoI in controlling the state police budget. Nonetheless, the Minister can issue an order on specific cases to audit procedures carried out by the state police as it has been the case of the police uniforms.

Presentation of Monitoring Report regarding the Action Plan against Corruption

Press Conference: Preliminary findings of the “Trust in Government 2014” Survey