This research was the missing link of the research projects on violent extremism (VE) as it focused on placing communities as the primary unit of analysis by exploring the community level factors and actors which make communities more vulnerable or resilient to violent extremism. The research examined the differences between affected and unaffected communities in three municipalities – Tirana, Korça and Kavaja – in an attempt to identify the underlying structural, social and ideological causes that account for the relative level of affectedness between the communities.

In the framework of this project, IDM conducted relevant outreach activities.

Tirana, 15 November 2018 – IDM organized the Final Conference of the project in Tirana, attended by stakeholders from state institutions, the international community, civil society, the religious community and the media.

This conference was attended by Ms. Susanne Schütz – The German Ambassador to Albania, who stressed that despite Albania being less affected by 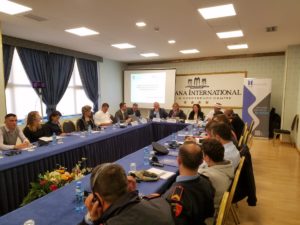 While in his speech Mr. Ylli Gurra, Mufti of Tirana mentioned that before 2015 there was a lack of social cohesion, communication with the community and a lack of trust. “There was not enough co-operation between security institutions, local and religious institutions, but after 2015 this has changed and there is a better co-operation between the actors. We need to build resilience in our communities in order to be ready for future challenges. Today the conflict is in Syria and Iraq, but tomorrow it can take place elsewhere, so we have to be prepared to face these challenges, “said Mr. Gurra.

Roland Alushani, The Chief of Community Policing stated that: “If involved in the discussion, police can provide a unique community perspective and play a useful role in preventing violent extremism as it is part of the community it serves and is ready to cooperate.”

PRESENTATION OF THE STUDY AT THE LOCAL LEVEL

Kavaja, 14 November 2018 – IDM held a Pilot Dialogue in the city of Kavaja, attended by representatives from the Municipality of Kavaja, Police Department of Kavaja, Muftini of Kavaja, civil society, as well as teachers, psychologists and citizens. Participants stressed the importance of civic values ​​in preventing violent extremism and the need for religious education. Some participants emphasized misuse of religion and religious misunderstandings.

activists and students. Participants appreciated the community‘s approach as the primary unit of analysis, as according to them, this approach is closer to local reality. They argued that strengthening multi-actorial co-operation is much needed to face various challenges including violent extremism.

Some of the main conclusions of the study are:

The study aims to pave the way for a better understanding of community-based actors and factors that have an impact on VE and to foster stakeholders (state institutions, the international community, civil society, religious community, media, etc.) to embrace a more proactive approach to VE prevention.