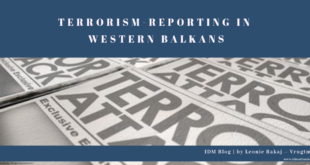 11 October 2018 – We all remember it as if it happened yesterday. Breaking News and interrupted TV programs, as New York’s World Trade Center towers were attacked. In awe of shock and unbelief those who were not watching TV rushed to lock themselves in front of the screens and observe the event unfold as massive plumes of smoke emerged from the North tower. Moments later, a second plane flew into the South tower, further fuelling feelings of confusion, disbelief and anger. As never before, the event unfolded on TV screens for the whole world to see. The superpower was attacked, and its people were scared to the point they avoided leaving their homes. Conclusions, angles, and perceptions were being formed as the event developed. Following the smoke, tragedy, and distress, it emerged that America was under attack. Its values, civilization, and everything the country stood for were at stake.

It is unimaginable that upon planning their attack, Khalid Sheikh Mohammed and his fellow senior al-Qaeda members did not consider the symbolism and visual appeal of their targets. The decision to attack the Twin Towers and the Pentagon are marks of a carefully crafted strategy. The Twin Towers were a symbol of American achievement, as their height kindled the clouds. Equally important was the symbolism of the United States Department of Defence, or the Pentagon as it is often referred to, a synonym with the US Military. Together, they embodied everything America stands for; economic progress, freedom and military might, all made possible by the ‘American dream’. The attack was not merely physical. It was an attack on America’s core values; launching a threat on its government, society, and ideals. The threat struck every American citizen.

Using symbols in warfare is not new. Throughout history, symbolism has played an important role as a propaganda tool in rallying public support for military expeditions, mobilizing the masses and building morale. As a result, building a narrative around military action is as critical as the fighting itself. Terrorist organisations are aware of the strong effect these symbolic targets have and use them to their advantage. Mass media has further increased the impact of symbolic targets, whereas terrorist organisations have learned how to effectively use both.

Media: a platform to turn murder into a message

It is a simple mechanism. Terrorist organizations need media attention to fuel fear, which in turn would push governments to consider their political aims – whatever they may be. Without media, public attention crumbles, and terrorist attacks would not spread fear among the public, which is the end objective. Instead of becoming a story limited to first responders, eye-witnesses and the local community, mass media amplifies its reach, impact, and significance with real-time reporting. Geographical distance, location or time differences are undermined by the speed news spreads, enabling us all to become part of an event, and feel physical fear and shock derived from it.

The media landscape has changed drastically since the emergence of mass media. This sophistication, and adaptation has been mastered by terrorist organisations who are well aware of media mechanisms. Media outlets are revenue-driven, and as a result they must compete for an audience, often leading them to seek angles with large public appeal. Fear and tragedy are a magnet for public attention. Coincidentally, threats of terrorist attacks draw large audience and increase viewers. This vicious cycle fuels media revenues and attention for terrorists, enabling both to reach their objectives.

Furthermore, terrorists satisfy mass communication’s urgency and need for new content, by carrying on attacks, and launching material online to dominate the news. Instead of planning and carrying out a traditional surprise attack, terrorists aim to create a media event. In this way, terrorist organisations widely publicize their cause – for free – through a phenomenon known as propaganda of the deed. Neville Bolt (2012) eloquently encapsulates this phenomenon as;

“a terrorist act of political violence aimed against state targets, sometimes populations, with the objective of creating a media event capable of energising populations to bring about state revolution or social transformation. Today’s revolutionary uses the weight of the media against the media.”[1]

A call for reflective journalism

There’s an increasing awareness of the role media plays in the way it reports on terrorism. In several Western European countries, media have agreed to frame their reporting on terrorism more cautiously. Instead of opening the evening news with ‘a horrible knife attack in our capital city’, or even intercepting programming for ‘breaking news’, editors position the event between other news to minimize the shocking impact and publicity it receives.

This reporting is called ‘reflective journalism’, in which the newsroom attempts to weigh the journalistic duty of informing the public against ethical constraints. News anchors avoid sensationalist framing, refrain from using the term ‘terrorism’ and sometimes they even hold off from referencing the terrorist group altogether. Instead, emphasis is put on reassuring the public on the swift response of the authorities, the recovery of the victims and the need “overcome” the situation as a nation. In the same vein, authorities have revamped their efforts to avoid speculation by providing swift informative reactions.

A good example of reflective journalism is the recent knife attack in Amsterdam. On August 31 this year, an Afghan man stabbed two American tourists in the hall of the capital’s main train station. As he rushed towards other commuters, a stationed police officer shot him in the leg. Following the incident, the station was locked down several hours as investigation took place.

The incident was worthy of breaking news. Unlike its neighbouring countries who have experienced both large and small-scale attacks over the past few years[2], the Netherlands had avoided such a tragedy. This was the first terrorist attack by an Islamic extremist in the Netherlands, since 2004 when a well-known Dutch producer and filmmaker was killed. Given the circumstances, one would expect a sudden release of the built-up tension in the shape of wide-spread panic. The opposite happened.

Within the first seconds after the attack, news broke on social media and was followed by reports on the country’s main newspapers and TV stations. Notably, the incident was reported without urgency, and there was no interruption of programming for breaking news. When news anchors mentioned the event, they framed it as an ‘incident’ and not an ‘attack’. Accordingly, all news outlets emphasized the remarkable police work, who were able to avert escalation by responding within seconds. In contrast, reporters dedicated little attention to the panic on the scene. In this way, the media refused terrorism a platform and minimised the fear spreading to the public.

Reflective journalism in the Western Balkans

Although reflective journalism seems a logical solution to minimise the incentives to conduct an act of propaganda of the deed, it also leaves media professionals in a difficult situation. When a media outlet is in dire need for an audience, it may not be at liberty to choose between ethics and revenue. Unlike in western Europe where media is often well-funded, which allows for cautious journalism, in Western Balkans, news agencies are often fighting tooth and nail for audiences and revenue.

There are severe challenges local journalist face. Media is often ill-funded, their market share is relatively small, and the fierce clientelism further complicates the landscape. Journalism jobs on the other hand are poorly compensated and salaries often delayed due to funding issues[3]. A good education, training, and ambition are not enough to get by as a journalist. One must have good connections, and even have open to make compromises to make it.

In Albania for example, the competition is so fierce that with 2.8 million inhabitants, 22 newspapers, 6 national TV broadcasters, 56 local TV broadcasters, 5 national radio stations and 60 local radio stations are fighting for an audience. Considering such competition, one must have an audience or go bust. To improve ratings, outlets often compromise the quality of their journalism. It is for this reason sensational reporting represented by catchy headlines, moving images, and provocative reporting dominates.

It is unlikely the embrace of sensational reporting will go away anytime soon as politics remains fractures and conflictual, while the public remains highly sceptical of change and distrustful of institutions. Such is the level of distrust, that to better control the angel of information, politicians communicate with their followers on social media, or through their well-drafted “news channels,” such as ERTV run by Albania’s Prime Minister. Journalists and media outlets are faced with a challenge, as the only way to inform the public on current events is to re-distribute what has been publicized already on his personal channels. Other sectors of the government, including police departments and municipalities have adapted similar methods to publicize their work, drastically limiting the space for media scrutiny.

Reflective journalism is not an easily attainable. It’s acquisition poses challenges, even in consolidated democracies where media is well-funded. However, it is a simple, yet effective way to counter misinformation, sensationalism, and even terrorism. Its practice hits at the core of terrorist activities, as it refuses becoming a platform through which they are publicized, where its martyrs receive attention, and the propaganda of the deed achieves its objective.

[3] During the European Academy for Journalists (20 September 2018), Lutfi Dervishi stated that ‘up to 70% of Albanian journalists have experienced payment delays’.