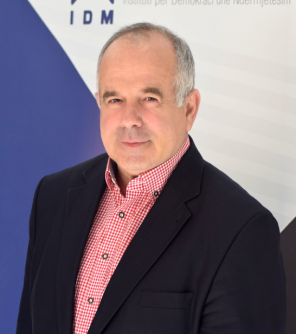 Sotiraq Hroni is a former Albanian diplomat, an adviser to Albanian Prime Minister (1997), and adviser to the President of the Republic of Albania until the end of 1999. Mr. Hroni is the founder and executive director of the Institute for Democracy and Mediation (IDM), a non-governmental organization that over time developed into a think tank organization actively contributing to reforms and development processes in Albania.

Since its establishment, Mr. Hroni’s main responsibility has been with the overall management and development of the organization. His continuous commitments stand with offering relevance to IDM’s strategic development with the country’s development priorities. Mr. Hroni’s contribution rests also in continuous efforts to strengthen the organization institutionally, build a team of like-minded individuals, and jointly lead result-oriented processes in each of IDM’s programmatic areas. Currently, IDM operates in four different research areas including Governance, Security, EU and the Balkans, and Local Governance & Integrated Development.

Through his vision, Mr. Hroni has led the organization’s efforts to grow and achieve a merit-based identity in the civil society market in the country and the region. Moreover, he has built efficient cooperation and partnerships with public and private institutions, which have sustained and grown over the years. This has led IDM to enjoy a credible and remarkable reputation in Albanian society.