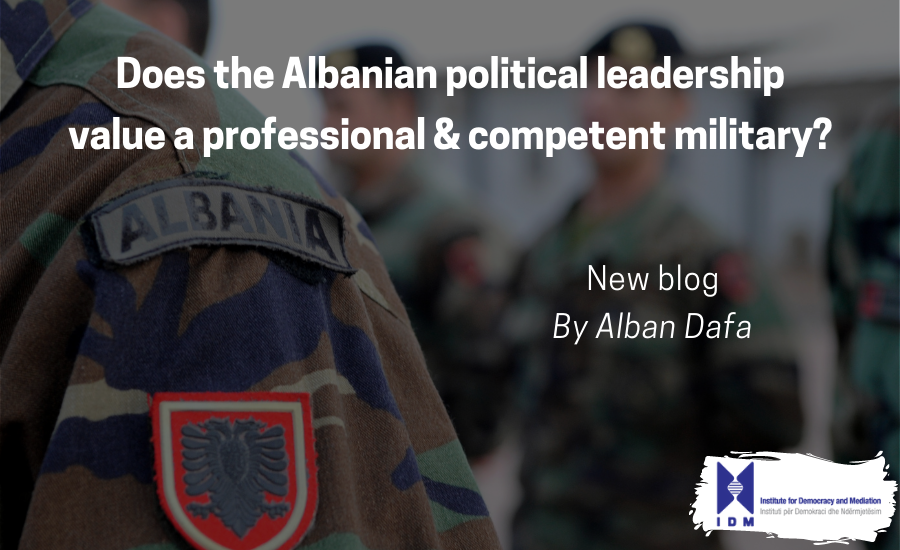 Does the Albanian political leadership value a professional and competent military? | September 2020

By Alban Dafa, researcher on governance and security

There is a worrying trend in the Albanian defence establishment whereby professional competency is becoming increasingly irrelevant for top leadership positions in the Albanian military.

On 29 July 2020, President Meta appointed a military doctor – Major General Begaj – as Chief of General Staff of the Albanian Armed Forces. This appointment provoked essentially no public debate despite being an unprecedented pick for the country’s top military position. Although this was a unique appointment, similar appointments of high-ranking military officers to positions that did not match their military specialities have been made in the past. Since 2012, the Albanian navy has been led twice by army generals.

These appointments have been possible through the exploitation of legal loopholes and a lack of political appreciation of the impact of defence policy on national security.

Strategic leadership appointments in the military

Appointing an army general to command the navy or the air force, or – vice versa – a navy admiral to command the army, is not legally prohibited. Besides the officer rank to become a Force Commander or Chief of General Staff, no additional criteria are needed to hold these important leadership positions.

The MoD directive on the standards for appointments in the Armed Forces notes that the appointment of general officers is the prerogative of the president and the prime minister, who appoint them in leadership positions in accordance with TOP (Table of Organizations and Equipment) specifications. These specifications, however, require only that officers appointed to top leadership positions attain general officer rank, but they do not prevent the appointment of general rank officers across military branches. These loopholes have allowed Albanian decision-makers to pre-empt any criticism on the legality of the appointment of two consecutive army generals to command the Albanian Naval Force.

The appointment of a military doctor as Chief of General Staff of the Albanian Armed Forces, however, is somewhat different. In this case, while there are legal provisions that could have prevented it, there are also loopholes that have allowed it.

Article 21, paragraph 1 of the Law on the Career in the Albanian Armed Forces states that “progress in rank up to Lieutenant Colonel […] for personnel in the medical corps and the military band is regulated by articles 13 and 14 [which regulates career progression] […]”, thus suggesting that officers who are military doctors or members of the military band can progress up to the rank of Lieutenant Colonel.

However, paragraph 4 of the same article states that “the military personnel in paragraph 1 can be promoted to other military ranks when they fulfil other conditions for the specific rank, specified in this law”. This provision renders the previous one irrelevant. If officers in the medical corps and the military band can progress beyond the rank of Lieutenant Colonel provided they fulfil the legal criteria “for the specific rank”, then setting limits for career progression for these two specialities is rather meaningless.

In practical terms, the provisions of article 21 allow military doctors to progress to the rank of general officer while the lack of specific criteria for top leadership positions in the military allows them to reach the position of Chief of General Staff.  The same path is legally free also for officers who are members of the military band.

The responsibility to ensure that the Albanian military is well-led lies with the following three public officials: the president, the prime minister, and the minister of defence. The force commanders and the Chief of General Staff are appointed or dismissed through presidential decrees. The president issues such decrees upon receiving a proposal from the minister of defence – for force commanders – or the prime minister – for the Chief of General Staff.

The agreement among these three key institutions is essential to ensure that the strategic leadership of the military has the required experience to effectively defend the country. Instead, these institutions have set the military up for failure by appointing general officers to top leadership positions for which they are unqualified.

The failure of Albanian institutions to ensure that general rank officers are promoted and appointed in accordance with relevant professional requirements and expertise suggests that either the Armed Forces are completely irrelevant to the political leadership or that there is a concerted effort by Albania’s political leadership to politicize the country’s military.

The future of the Albanian military

This inevitably sends the message that mastery of the military profession is not valued in the Albanian military. It is therefore not important to strive for excellence and professionalism in the military because they are not important for military leadership and do not determine professional success. Anyone can be made a force commander regardless of whether they have the knowledge or experience for the job.

The current legal loopholes and the decisions by the Albanian government and the presidency are not only irresponsible; they are dangerous. The precedents of appointing general officers to positions for which they are unqualified is sufficiently dangerous for the future of the military, but appointing military doctors – who receive limited military training – to lead the Albanian military, ensures the ineffectiveness of the Armed Forces and its eventual demise.

If a military doctor can lead soldiers, sailors, and airmen, then one must wonder whether the next Chief of General Staff will be a musician.