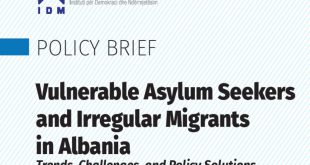 June 2019 – During the last few years (2015-2018), Albania has witnessed an increased influx of irregular migrants entering the country, mostly via the southern border with Greece. The influx of irregular migrants intercepted in Albania during 2018 was around 5,730 foreign nationals, almost five times higher than in 2017. The share of women and children went up as well in 2018. Many migrants resort to smugglers and criminal networks to avoid detention while crossing borders illegally, often due to a scarcity of other viable and safe avenues for migration. Though Albania is considered a transit path in the “Western Balkan route”, the massive irregular flows of migrants raise the risk of vulnerable groups falling prey to human trafficking and sexual exploitation.

The policy brief explores the current immigration trends in Albania and outlines some of the main challenges that the country faces, with a particular focus on vulnerable groups of asylum seekers and irregular migrants, such as unaccompanied and separated children, women, and minors who might potentially be victims of trafficking, exploitation, and abuse.

The policy brief is carried out in the framework of the project “Europeanization beyond process” supported by the Open Society Initiative for Europe – OSIFE.

An Action Agenda for Civil Society: The path to increased impact and civic engagement